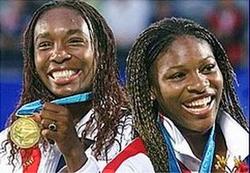 Venus Williams was born in Lynwood, California, on June 17, 1980. One year later, on Sept. 26, her sister, Serena Williams was born in Saginaw, Michigan. The two sisters were raised in an economically depressed Los Angeles suburb of Compton but found comfort in tennis.

The sisters first started playing when they were four years old. Since they were poor and could not afford coaching from pros, let alone afford new tennis balls, they simply made do with the old tennis balls they found on courts. Their father, Richard, who did not know much about tennis, bought a book about the game and began coaching the girls. They played for six hours straight every day and polished their skills. Before the girls were even born, Richard had plans for his children, "I went to my wife and said, 'Let's have kids and make them tennis players,'" according to Newsweek.

The sisters entered their first tournament when Venus was nine and Serena was eight. They won the event, and from then on, they began winning all the tournaments in which they participated. At age 14, Venus turned pro and by the age of 17, reached the U.S. Opens, though she lost to Martina Hingis. By that time, Serena had also become a pro, and together, they soon became the most dominant female players in tennis.

Between the years of 2002 and 2003, Serena won four grand slam titles: Wimbledon, 2002 French Open, U.S. Open and 2003 Australian Open. Venus was also successful in 2000 when she won singles titles at Wimbledon and during the U.S. Open, a title which made her the first black woman since Althea Gibson in 1958 to win the U.S. Open singles crown.

In addition to tennis, the sisters are in the midst of other occupational pursuits. Serena recently launched her own line of Nike tennis clothes, and she and Venus have also been modeling and starring in commercials.