On Oct. 9, Sesame Street unveiled a new character, Lily, in an hour long special called, "Growing Hope Against Hunger." Lily, a poverty stricken seven-year-old, was created to shed light on childhood hunger in America, and will appear regularly on the show. 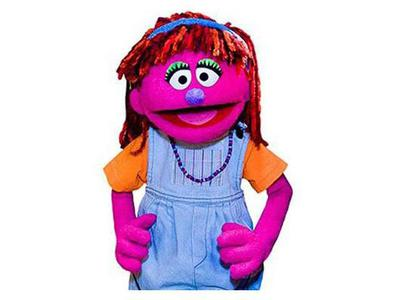 During her debut appearance, Lily visited a community garden and local food pantry to share her story with popular characters such as Elmo, Rosita, Bert and Grover. She also met celebrity guest Brad Paisley, who hosted the Sunday night special with his wife Kimberly Williams.

Sesame Street's primetime special shared real-life families' stories to help raise awareness of hunger issues within the United States. It also featured strategies and tips that have helped these families find food. Wal-Mart sponsored the program as part of a $1.5 million grant towards an educational initiative, and presented private screenings of the show in select communities.

According to the U.S. Department of Agriculture, over 16 million children in the U.S. are "food insecure," nearly one in four have limited or uncertain access to affordable and nutritious food and 10 percent relied on food stamps at some point in 2010.

In an interview with The New York Times, Sesame Street's Vice President of Outreach and Educational Practices Jeanette Betancourt explained Lily's importance for the show. "We thought long and hard about how we really represent this from a child's point of view," she said. "We felt it was best to have this new Muppet take this on in a positive way and a healthy way."

Lily's nonprofit construction and design team, the Sesame Workshop, wanted to make her seem as realistic as possible. Her voice, style of dress and juvenile mannerisms were strategically implemented in order to be more relatable to younger viewers.

Lily's introduction to the Sesame Street program comes at a coincidental time for Blazers, with the Student Government Association's (SGA) annual canned food drive just around the corner. Until mid-December, students can donate nonperishable food items to collection boxes in their first period classes, which will be given to local charity organizations that feed the hungry.