Hundreds of Blazers participate in event

The Student Government Association (SGA), in partnership with the American Red Cross, hosted a blood drive on Wednesday. More than 200 students and staff signed up to give blood at stations in the gymnasium. The event spanned throughout the day. 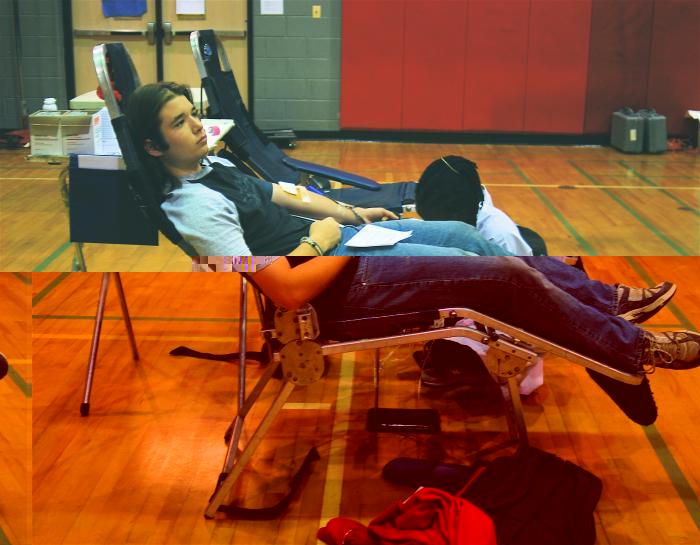 In order to give blood, each donor was required to answer questions about their health history, ensuring that their blood was safe for transplant. Volunteers from the Red Cross were there to extract a unit of blood, which equates to a pint. After the drive, the blood will be delivered to various hospitals in Maryland. "Each donation can save three lives," SGA President Sibyl Brown said.

Students, who had to be 16 or older and meet health requirements to sign up, were given a pass to leave class for the drive. Faculty who met the health requirements were also able to participate. Earlier in October, SGA representatives recruited donors by posting sign-up sheets outside of their office as well as traveling to different classes, asking if anyone wished to participate. The amount of interest exceeded expectations. "We ended up being overbooked," Brown said. "We had more people than we did slots."

The turnout surmounted previous years, senior SGA co-organizer Carlos Arana said. He believed the participation was an excellent way to aid in stopping the deficit of blood available to patients in area hospitals. "Maryland needs about 35,000 units of blood," he said. "Currently, Maryland only donates about 15,000 units, so we have to get blood from other states."

Gail Crummel, Operations Service Manager for the Red Cross, was elated to see the number of people at the event. "One word: fabulous!" she said of the turn out. Crummel spoke of the importance of receiving blood donations, especially during the colder months. "Our numbers dip during the winter," she said. "Going to schools help us to get more units."

Many of the participants were first-time donors. Though admittedly nervous, senior Violet Cavicchi was happy to help save lives. "I think it's a good way to help others," she said. "There's always a need for blood."

The SGA was delighted to see the enthusiasm that participants had in giving blood. "We're doing another drive in the spring," Brown said. "We hope to have another great turnout then as well."