The administration prompted the SGA to create a tutoring program last school year. La and Simon volunteered to head the program during the first SGA meeting this year. Instead of creating a completely separate program, they decided to revise and add on to the academic support structure already instated. "It's a supplement to the already existing academic support," La said. 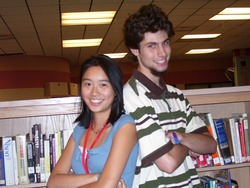 Photo: La and Simon volunteered to take on the task of reshuffling academic support.

Photo: La and Simon volunteered to take on the task of reshuffling academic support.

La and Simon hope to address several issues in the current academic support system. One problem is that students who prefer to seek help during the lunch periods often find their teachers unavailable. "They're understaffed," Simon said. Available teachers sometimes can only administer tests because they cannot aid students in subjects they do not teach.

Teachers in each department will recommend roughly 20 students to the SGA as potential student tutors. Each recommended student will receive an application, and the SGA will create a tutoring schedule for each department. SSL hours are available for tutors.

In addition to the student tutors, one or two teachers will also supervise the classroom set aside for academic support. The students, some of who will be taking the same class as the tutees, will do most of the teaching though. "We're students helping other students; this is what SGA is all about," Simon said. To commend the students and teachers for their work and check on the progress of the program, SGA will sponsor a monthly "pizza party."

The SGA will also collaborate with the Blair Sports Academy (BSA) to institute a similar program after school. BSA already provides a room available to students who wish to study, but it may request additional tutors experienced in the core classes to supplement the after-school help sessions, according to Simon.

La and Simon presented the program proposal to Blair's ILT on Sept. 6. The proposal received wide support and "no one objected," La said. One ILT representative recommended working with the BSA and many others gave suggestions on how to further expand the program and gain funding. "Overall, they were very pleased with us," La said. SGA sponsor Rondai Ravilious was especially satisfied with their presentation. "I made a suggestion or two, but it was so well done that they didn't need any suggestions," Ravilious said.

In order to promote the new and revitalized academic support structure, BNC created a video package that will air InfoFlow soon after the program is initialized in October. La and Simon also asked teachers to recommend students who need additional help to the new academic support program.