The Student Government Association (SGA) will add a new tutoring program to its fall agenda, which already includes homecoming, the Charity Challenge and the canned food drive. These events will be the SGA's main priorities for the fall, according to SGA sponsor Rondai Ravilious. 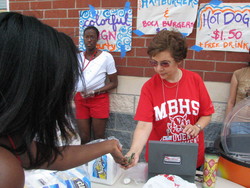 Photo: Ravilious works the concessions at SGA's Back to School BBQ in the fall.

Photo: Ravilious works the concessions at SGA's Back to School BBQ in the fall.

SGA President Molly Martinez said the SGA's main goal this year is to focus on uniting the school and having fun. This year, the SGA will "really focus on school unity," Martinez said. "We're going to have a lot of fun events [and] make it feel like high school again."

The tutoring program is a new initiative this year spearheaded by seniors Ariel La and Ben Simon. Sponsored by the SGA and the Blair Leadership team, the program helps Blazers tutor other Blazers in various subjects.

The SGA is putting a lot of effort into starting the tutoring program, according to Ravilious. The tutoring program "is going to take pretty much everybody on the leadership team and SGA's efforts over the next couple of months for sure," she said.

In addition to the tutoring program, the SGA will devote much of its time and energy in October to homecoming. This year's homecoming game will be on Friday, Oct. 26 followed by the dance on Saturday, Oct.27. The SGA pitched eras as the homecoming theme on Wednesday, Sept. 12, and each class president will decide grade themes on Sept. 24.

Spirit Week will be from Oct. 19 to Oct. 26. A pep rally "where we wrap up all our sports teams" is also planned for Oct. 26, said SGA Director of School Spirit Francesca Blume. The SGA might hold a winter formal dance after homecoming, Blume said.

The canned food drive, another major fall project, will take place in November. The cans collected will benefit Rainbow Homeless Shelter in White Oak, as in past years.

The SGA hopes to improve on the 3,272 cans collected last year so the food bank can reach more people, according to Ravilious. "They have just been so thrilled because they have been able to expand their base during the holiday times because of all the food," she said.

In December, there will be a Penny War as this year's Charity Challenge, according to Martinez. In the Penny War, each grade will compete against the other grades by trying to collect as many points as possible. Students add points by depositing pennies into their class's collection jar and deduct points from another class by adding higher denominations into an opposing class's collection jar. In the end, the money collected in each class's jar will go to a charity of the class president's choosing.

Additional plans for the winter and the rest of the year, including a blood drive at an undecided date, are still in the works. The SGA is going to "try a lot of new stuff this year," Martinez said.