The SGA-sponsored Winter Formal dance, originally scheduled for Feb. 16 and postponed until Feb. 23 because of inclement weather conditions, has been canceled. Refunds will be available through the SGA office. 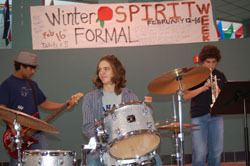 Photo: Seniors Shaagnik Mukherji and Eleazar Rubenstein and sophomore Jonathan Gootenberg perform with the Jazz Ensemble in the SAC at lunch, part of this week's rescheduled Winter Spirit events.

Seniors Shaagnik Mukherji and Eleazar Rubenstein and sophomore Jonathan Gootenberg perform with the Jazz Ensemble in the SAC at lunch, part of this week's rescheduled Winter Spirit events. Photo courtesy of Ellie d'Eustachio.

According to SGA President Eric Hysen, the SGA had hoped to hold the rescheduled Winter Formal this Friday, in place of the Battle of the Bands event that was originally scheduled for that evening. However, an announcement aired this morning after Info Flow stated that the dance would not take place. "Numerous conditions were taken into consideration in canceling the dance and it was the administration's decision to do so," according to the announcement, written by assistant principal Linda Wanner. The message urged that "in no way should this reflect negatively upon the leadership of the SGA."

Students who purchased tickets for the dance last week may get a full refund by taking their original tickets to the SGA office during either lunch any day this week.

The pep rally originally scheduled for Feb. 14 has also been canceled, because of the amount of missed class time. The Winter Spirit days that were missed because of snow have been postponed with slight modifications to this week. Today is "Bad Hair Day," Thursday will be "Twin Day" and Friday will be "Blazer Spirit Day."

While Hysen and the SGA still hope to hold the Battle of the Bands, it has been postponed until further notice.

Jessica Cutler. Jessica Cutler is an energetic girl practicing for her intended career as a neuropsychiatrist on her unsuspecting classmates. She enjoys tennis, crosswords, Panera and exploring the Metro system. Also, she's developed a recent affinity for betta fish, and is the proud owner of Robert L. … More »