With the ID policy controversy, hallway sweeps, and a host of new events, it has been a very busy and tumultuous yet successful year for Blair's SGA under the leadership of 2006-2007 SGA President Eric Hysen. In spite of such success, the SGA has realized major flaws in its organization and methods of operation, leading to structural changes that will be incorporated into next year's SGA. The SGA will also face the challenge of meeting and working with a new principal next year.

This school year was witness to several policy challenges for SGA, including the new ID policy and hallway sweeps. Many new events were also introduced this year, including the Back-to-School Barbeque, Battle of the Bands and Blair's first outdoor pep rally and powder puff football game since the 2003-2004 school year. 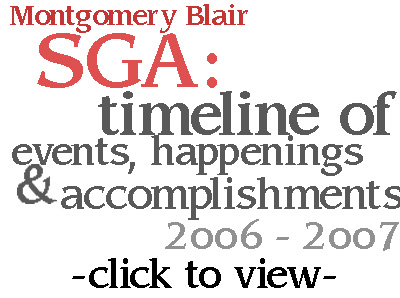 Photo: Click to view a timeline of the SGA's accomplishments this year.

Photo: Click to view a timeline of the SGA's accomplishments this year. Photo courtesy of Bonnie Ding.

Former Director of Student Advocacy Terence McPherson describes the SGA's undertakings this past year as being "very ambitious," and says that they had major policy victories. They helped revise the ID and hallway sweep policies and organized the new parent drop-off procedure in the student parking lot. The SGA was responsible for suggesting that the administration allow students to go to academic support rather than detention if caught arriving late to class during hallway sweeps, according to 2007-2008 SGA President Molly Martinez.

McPherson feels that the SGA and its members poured much effort into making the school a better place for students. "Our hearts and spirits were into trying to change the school. We definitely made major gains with the ID policy," he says. "We were engaged in many more activities, and I feel that this has been one of the more successful years for our SGA."

Over the course of the school year, the SGA has also formed a strong bond with the school's administration, especially with Hysen and other top SGA leaders attending weekly Instructional Leadership Team (ILT) meetings. "Eric did a really good job of forming a good relationship with the administration," says SGA Communications Director Vijay Baharani.

This has been the second year that student leaders have participated in ILT meetings, where SGA members often bring up important student issues to the administration, department heads and resource teachers, according to Hysen.

"We've really built off the success of the last two years, when SGA was under the direction of Sebastian [Johnson]," he says.

Flaws in organization and communication

Despite these successes, however, many organizational issues still exist within the SGA.

A few SGA officers mentioned that following through with event planning and projects is still a major problem. This year, for instance, the SGA-sponsored talent show supposed to be held in November was first postponed and then cancelled outright because of difficulties with audio equipment. The Winter Formal dance was also postponed and then cancelled because of weather conditions and chaperoning problems, and a proposed tutoring program also never came to fruition.

Another major problem over the years has been the relationship between the elected class councils and the cabinet, the executive branch of the SGA. Historically these two components of the SGA have not been very close.

"There should be more communication between the school and class SGA's," says former Director of Club Services David Hu. "Right now, they seem to be operating as separate entities, when in fact they should work together because they share the common goal of serving the student body."

Class council members' main responsibility is to raise money for their respective classes, and the senior class council is always tasked with raising money for and organizing prom. Cabinet members, who are appointed and must take the student leadership SGA class, are mainly responsible for planning and organizing school events and revising school policy.

An additional problem has been the relationship cabinet members and senators and the rest of the student body. Class council members enjoy a relatively high degree of visibility due to their campaigns and speeches to the student population. But unlike the class council members, members of the cabinet are appointed rather than elected, resulting in their much lower visibility.

"The cabinet members on SGA should be more visible," Hu says. "Except for the President, many Blazers have no idea who is on the SGA at all."

Changes for next year

To remedy these issues, the SGA has panned major structural changes for the 2007-2008 school year. Two new school-wide elected positions, the treasurer and secretary will be created, and class treasurers and secretaries will be appointed rather than elected as in the past.

Next year's senate will undergo changes as well. The new structure will reflect the academies, with two elected members from each academy and two each from the Magnet, CAP and ESOL programs. Class president and vice-presidents will also be full members of the Senate, according to Hysen.

Working with the new principal

The new school year will also bring some changes for the SGA, especially with a new principal taking the helm.

On June 14, an interview panel will aid Superintendent Dr. Jerry Weast in selecting a new principal for Blair. A few students representing the SGA will be able to participate in the selection process for the potential principal candidates, according to Baharani.

No matter which candidate is selected, however, SGA will undoubtedly face huge challenges in the upcoming year with a new principal entering the building.

Despite the arrival of someone new, the SGA is optimistic about its success for the 2007-2008 school year. "We've built so much and come a long way this year, and we're hoping to continue our progress with the new principal," says Martinez.