RFK stadium's Irish festival more pumped than ever before

Word is that the Irish know how to party. DC's Shamrock Festival, self proclaimed as the largest St. Patty's festival in DC, featured music, games and more last Saturday in celebration of the Emerald Isle's most famous saint. And boy, did they get their party on.

Boasting a lineup of over 40 bands and DJs, Shamrock Fest, which started at noon and closed at 10 p.m., became a DC tradition several years ago as a large street festival. It has since grown to include carnival-like entertainment, nine different stages and an abundance of alcohol. Over the course of the ten hour long festival, bagpipe troops, step dance teams and DC favorites like Jimmy's Chicken Shack performed.

Opening the musical events of evening early was Street Dogs, a Boston-based band that has opened for Flogging Molly in the past. With music that draws strongly from Dropkick Murphys, primarily because of Mike McColgan, a singer shared between the bands, these kids kept the audience of thousands entertained before the big name took over. 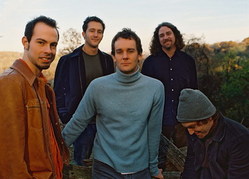 Photo: Carbon Leaf, a Celtic rock band based in Virginia, opened the evening by playing favorites like "The Boxer" and "Shine." Photo courtesy of Carbon Leaf

Photo: Carbon Leaf, a Celtic rock band based in Virginia, opened the evening by playing favorites like "The Boxer" and "Shine." Photo courtesy of Carbon Leaf


Following Street Dogs was Carbon Leaf, a soft Celtic rock band from Virginia. As crowd-surfing kicked into gear, Carbon Leaf sang fan favorites like "Shine" and ballads like "Mary Mack." The band croonned their best-loved song, "The Boxer," which chronicles the trials of relationships, singing "she is the Boxer, she knows/ when and where to strike/He is the Boxer, he knows/no peaceful sleep tonight." Although the band is slower paced and played more folk than rock, they maintained the Celtic inspired atmosphere.

Like Carbon Leaf, Flogging Molly sang classic hits from all four of their albums, beginning with "Another Bag of Bricks" and leading up to "Drunken Lullabies," the title track for their 2002 album. Dave King, the lead vocalist, performed lesser known songs like "Laura," an ode to an old girlfriend, from "Whiskey on a Sunday" and "Factory Girls" from their 2005 album "Within a Mile of Home."

"Queen Anne's Revenge," sung by bass guitarist Nathen Maxwell, epitomizes the pirate fixation we found in their earlier work and, intensifying as it progressed and alluding to Blackbeard's infamous ship. Throughout the performance, King warmly addressed audience members in the mosh pit, advising them to look out for one before nostalgically remembering concerts from his youth.

The strong drum beat of "Tobacco," along with King's asides about the song's contexts, did well to set up one of the band's most politically charged songs. Recounting Cromwell's invasion of Ireland in the 1600s and how the Irish were enslaved in Barbados and other Caribbean islands, King introduced the song by asking how many in the crowd were Irish before launching into the soung to deafening shouts and cheers.

Before "Tobacco," the band played "Rebels of the Sacred Heart," targeting the heathen members of the crowd, according to King, and "The Likes of You Again," dedicated to his deceased father. During the fast pace of both songs, some in the audience attempted Irish step dancing while others chanted the chorus along with the band.

By the end of the evening of sugary and fried food, child-like games and choice music, festival goers had had their fill of Irish music. While the majority of the 40 bands were little known folk and rock bands, the headline bands of Carbon Leaf and Flogging Molly made Shamrock Fest a lucky Saturday choice.