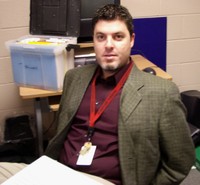 Although his dream job as a child was to be a professional athlete, a desire to teach developed in high school, and Shindel is happy with his job because he likes to challenge students. He says that his favorite part of teaching is "engaging students in what I think is meaningful dialogue and learning."

In high school, most people have several extremely embarrassing moments, but Shindel only has one in his entire lifetime. He says this is because he has geared his whole life toward not embarrassing himself. Shindel says that once when he was seven or eight years old he was washing the car with his dad who brought out a 'Brillo' pad. Shindel proceeded to use this on one side of the car, not knowing that it was for the tires and not the body of the automobile.

While he is keeping himself from embarrassment, Shindel does other things as well. He spends the majority of his time with his one year old son, pictures of whom adorn the wall behind his desk. In what little free time he has alone, he also enjoys reading, politics, basketball and tennis. Other than that, he doesn't believe that his life is very interesting. "I'm pretty boring," he chuckles while he taps his leg under the table as he thinks. While his appearance may agree with this opinion (he wears a casual green sweater and khaki pants—typical teacher outfit), his personality is hardly uninteresting.

His students appreciate his teaching style because he is amusing. "Mr. Shindel's class was my favorite part of the day—he always had something exciting to talk about. Shindel's a unique character, a real riot," says Junior Kent Anderson. Shindel agrees and describes himself as "funny—at least I think I am and I don't care what anyone else thinks." Shindel also describes himself as "community oriented, passionate, and challenging." This interesting and humorous teacher has certainly made a comfortable home at Blair.