It was a hard speed workout early on in the cross-country season, and junior Jeremy Ardanuy was focused on making good time. So when he first felt the sharp pain in his hip, he logged it as a typical runner's pain and ran on to finish the workout. He wouldn't find out until weeks later that the source of his pain was a stress fracture in his hip, an injury that would keep him from running for the rest of the season. 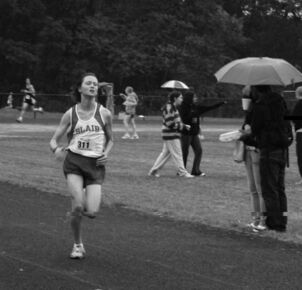 A study published in the monthly scientific journal, Radiology, revealed that stress fractures make up about 10 percent of all sports injuries and between 4.7 and 15.6 percent of all running injuries.

Runners like Ardanuy are often forced to step back from the starting line to recover from the injury, resting for a period of time before working their way back to full speed. According to physical therapist Phyllis Williams, most injuries in young athletes can be treated through regular planned exercises and therapy. For Ardanuy and others, the process of recovery is frustrating but extremely rewarding.

Ardanuy believes that a sudden increase in the amount and intensity of running he was doing was most likely the cause of the injury. "It was just a lot of running," he says. "I was putting in too much mileage." When he finally got home that evening after practice, he took a bath, iced his hip and took some Ibuprofen to help with the pain. "I didn't think it was that bad," he says. "I thought it was probably just a minor injury."

When the pain persisted for a several days, Ardanuy made a visit to his doctor, who told him that he had probably strained his hip and would probably feel better in a week or two. But after a few weeks, Ardanuy was still hurting. Doctors took x-rays and ran tests, finally discovering a stress fracture in his hip.

For junior Gabe Pollak, a co-captain of the cross-country team, injury was more readily explained. Pollak says that he is often plagued by injuries, and a bout of swine flu early in the season had left him with weakened muscles. So while a pain reminiscent of a stress fracture in his foot that he had sustained last year was unwelcomed, it was not completely unexpected. "My foot started hurting after a couple of sets of fast-paced stuff," he says. "I just felt a pain similar to the feeling of my stress fracture." He spoke to his coaches and took himself out of the practice.

With regionals fast approaching, Pollak was forced into a difficult choice. On the one hand, he did not want to aggravate an old injury. But Pollak had been working up to regionals and felt an obligation to his teammates. "There was a chance that I could have actually fractured the bone, but it was a very small chance," he says. "I have a responsibility to my team." Pollak ran as well as he could, but the injury was a constant hindrance. "I'm very happy that I ran at regionals," he says. "I'm more upset that I didn't run as fast as I could have."

In the season when they would normally be running at their highest speeds, Pollak and Ardanuy were forced to slow down. "I've just kind of shifted my lifestyle, become a little lazy," says Ardanuy. "There was probably a couple of months when I didn't run."

And for Pollak, the slowed pace was almost stifling. "I'm extremely frustrated because I just wish the only thing that was holding me back was my motivation," he says. "I wish I didn't have a frail body."

Both Ardanuy and Pollak are on their way to recovery, though, however trying the process may be. Pollak has been returning to biking and running bit by bit and says he is focusing on weight lifting to prevent future injuries. "The injury I had this year wasn't really giant, but it gave me a chance to realize that I had to get my muscles bigger," he says. "If the muscles around where I've been getting injuries were stronger, then maybe I wouldn't get the injuries."

Williams says that stress fractures like Pollak's could be helped by physical therapy sessions but that consistent, careful workouts may be enough treatment. "As long as you exercise, you'll get back on track," she says.

So, after a period of frustrating stillness, Ardanuy and his doctors are now working on a rehab plan to get him back in the game. He now runs a few times a week for about three miles each time, and the distance and frequency will continue to increase as he makes his recovery. Though he missed much of the cross-country season and is unable to participate in indoor track this year, Ardanuy says he is looking forward to the outdoor track season in the spring. "It's just fun running fast," he says. "You're happy when you're running."

Pollak is also anxious to get back on track and improve his running once again. "I want to know what my best is," he says. "I'd like to be able to do my best all the time." But the most rewarding part of his return, he says, will be the ability to stand by and support his teammates once again. "A lot of what keeps you going is your teammates," he says. "I should be with my team."