Should MCPS put BMI on report cards? NO: Weight is a personal matter

In an effort to further the nationwide crusade against obesity, school districts in Pennsylvania, New York and Texas have advocated adding a student's Body Mass Index (BMI) to his or her report card. BMI is a commonly used equation that determines an individual's body fat relative to his or her sex, height, weight and age. Supporters of the policy argue that both parents and students need to be more aware of childhood weight problems, while opponents counter that a student's weight is a private, non-academic issue.

An A in English, a B in math, a C in history and another A in Spanish. But in that new category on the top of the report card - what is that, a 31.2 in...obesity?

The BMI, a new attempt by state legislation to bring the battle against obesity to a fresh front, is an understandable but misguided attempt to improve student health. MCPS should make the logical decision and reject the addition of BMI onto student report cards, leaving the private subject of a child's own obesity to students and parents - not students, parents and schools.

Although an alarming number of children and young adults in America are obese - according to the American Obesity Association, approximately 30.3 percent of children are overweight, and 15.3 percent are obese, while 30.4 percent of adolescents are overweight, and 15.5 percent are obese - this does not allow for schools to take a non-academic role in their students' lives. The entire concept of including BMI on report cards demonstrates a breach of a student's non-scholastic private life on the part of schools. Although schools instruct students on non-academic subjects such as sex education, they simply educate and inform; they do not pass judgment by giving students a "grade" on their sexual behavior. The job of MCPS 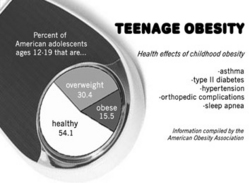 Photo:
(especially through report cards) is to focus on the academic performance of a student; personal characteristics have no place under the judgment of a school district. It is the responsibility of a school to teach children, not grade them on their eating habits.

In a culture preoccupied with skinniness, children and young adults are constantly bombarded by media attention that focuses on the popularity and success of those with size zero frames. The majority of students who are overweight or obese are aware of their weight problems; they do not need the added stress and anxiety of being "graded" on their health. As Adelaide Robb, Medical Director of in-patient psychiatry at Children's National Medical Center in Washington, D.C., described on a CBS News Online forum, "Kids who are overweight have great difficulties with self-esteem. Shaming kids by telling them they are fat is no good." Were MCPS to assign an academic slant on a non-academic issue such as weight, even more health problems could arise, leading to lowered self-esteem, depression or eating disorders in children.

In addition, BMI is only one factor in determining a person's health, and it is flawed in the respect that it does not take into account an individual's lean body mass, body frame or muscle mass, according to www.healthfoods.com In fact, who is to say that MCPS-calculated BMIs will uphold all four measures " weight, height, age and gender " that are important in determining an accurate BMI and giving parents the whole truth about their child's weight? Instead of adhering to the original equation, schools might take shortcuts that would measure only body height and weight, skewing results and giving students inaccurate numbers.

The duty of school districts is to educate students. Instead of wasting tax dollars on an effort that would inaccurately "grade" students on a personal issue, funding for health education in public schools should be increased. Schools should include more classroom instruction on healthy habits and send information to all parents about exercise and good eating habits for their child, while strictly leaving private discussions about individual students' health problems to those students and their parents, not to their school nurses or administration. Through these proposals, MCPS can conduct a variety of initiatives that will be more effective " and less intrusive " than a BMI "grade" in keeping students healthy.