Sideline Report: A long-term look at the Spurs and Heat

Following the NBA finals, opposite tales for San Antonio and Miami

The Miami Heat have just barely begun their summer long championship celebration. There are many more bottles to pop and celebrities to party with at Story Nightclub (and of course Club Liv). As long as the Heat have sobered up by next season's opening day, there should be no reason for anyone to complain about what the people of Miami do best: party. While they're all out clubbing, however, the rest of us should reevaluate the aftermath of the 2013 NBA Finals.

Yes, the Heat did win their second straight NBA championship and yes, LeBron James, undoubtedly the greatest basketball player in the world, won his second straight Finals MVP. But after all, isn't that what they were supposed to do? They were easily the preseason favorites to win it all and many would have considered anything less a failed season. So the non-stop discourse over Miami's accomplishments and the fawning over LeBron James is really a waste of paper, ink, breath and whatever other mediums that ESPN uses to get their point across. Instead, we should all step back and take a good look at the bigger picture for both teams.

What does this loss mean for the Spurs?

San Antonio's long-standing version of the Big Three consists of Tony Parker, Tim Duncan and Manu Ginobili, but their days together may be numbered. Parker, 31, isn't too old and has shown no signs of slowing down yet. He was a legitimate MVP candidate this season and has reminded a lot of NBA fans that he is still one of the best point guards in the league. 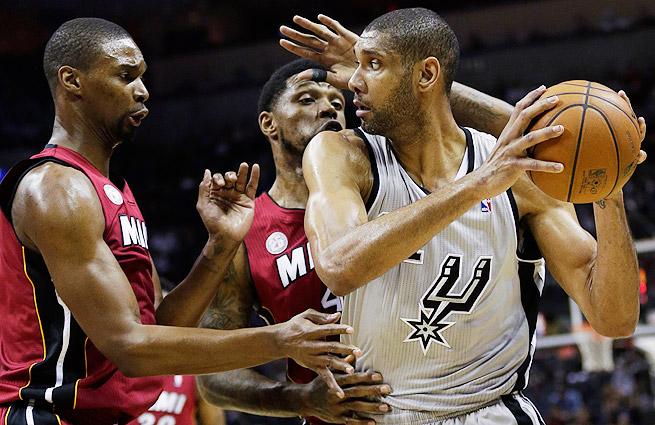 Photo: Tim Duncan had a great performance in the finals at the age of 37, but it was not enough.

Photo: Tim Duncan had a great performance in the finals at the age of 37, but it was not enough.

Duncan, even at the age of 37, played this series as if he still had something to prove. There is no question that he is one of the greatest, if not the greatest, power forwards of all-time and he showed it. Duncan averaged a double-double during the Finals (18 points and 12 rebounds) while also averaging 36 minutes a game (I repeat, he's 37!). It would be wishful thinking, however, to believe that Duncan can maintain those kinds of performances regularly during another 82 game season.

Ginobili is 35, banged up, and unlike his aforementioned teammates, was far from impressive during this series. His costly turnovers, bad decisions and poor play during the Finals hurt the Spurs tremendously. He will be a free agent this summer and the Spurs will have to decide whether to let him walk or bring him back.

Outside of their Big Three the Spurs still have young, solid pieces in sharpshooter Danny Green, backup point guard Gary Neal and the underestimated Tiago Splitter. Also, don't forget the highly talented and rising star they bring back in Kawhi Leonard. But despite these returning parts, the Spurs team that just lost in these Finals was the best team they have had in a while and the best they will have for a while.

Though Parker can certainly still play, Duncan can't keep playing the way he has been and Ginobili is on a downward slope as he nears the end of his career. During his post-game 7 interview, however, Spurs coach Gregg Popovich referred to Leonard as "a star in the making," and Leonard will likely turn into a prolific scoring option alongside Tony Parker. On the other hand, Danny Green may not be consistent enough to play well in big games and Gary Neal is seemingly stuck as a backup because of his position of point guard behind Tony Parker. Although I will defend Tiago Splitter against his mockers, it is absolutely ridiculous to think he can replace Duncan's production in the near future. When it comes to the draft, the Spurs have the 28th and 58th picks of an already weak draft class. Add all of that to the fact that the Western Conference is full of superstars and young, talented teams and it is very hard to picture San Antonio back in this position next year.

What does this win mean for the Heat?

For Miami, the future is a bit brighter. First and foremost, they have the league's best all around player, LeBron James, who is comfortably in his prime. He isn't going anywhere so Miami will be in title contention every year. The added benefit of having LeBron James, a superstar who is unselfish with the ball, is that his abilities attract other talented players. The idea of playing alongside the best and most unselfish player in the NBA is an outstanding opportunity that many players would jump at (i.e.: Chris Bosh, Ray Allen, Mike Miller). It also doesn't hurt that the free agents who join the Heat get to live in South Beach, a place with great weather, great parties and no income tax.

The Heat will always be title contenders as long as they are led by LeBron James but if they want to win championships they need very productive pieces and/or certified stars. The two biggest questions in Miami involve the other two-thirds of the Big Three: Dwyane Wade and Chris Bosh.

Wade is 31 but he seems to inhabit the body of a 61 year old. He is perpetually banged up and his performance has suffered. Though we saw a flash of the old D-Wade in Game 4 of the Finals, his play has been spotty at best during the playoffs. In fact, LeBron and the Heat actually played better when Wade was on the bench. Wade's health situation is quite murky with his knees having been recurring issues over the last couple years, but if Wade can stay healthy he will be the partner that LeBron James expected to have when he first arrived in South Beach.

As for Bosh, despite all the ridicule thrown his away and his disappearing acts on offense, he was a big reason why Miami was able to stay alive in Game 6. His length and mobility make him a versatile defender even though he struggles to defend bigger centers. Having a mobile player at the five position that can get up and down the court quickly enables the Heat to play the fast break, up-tempo style of offense that they love to run. Bosh can also hit the occasional outside shot, which makes him a valuable asset. So despite his woes this season, Bosh should be fine as a new season begins and a fresh start emerges.

With those three forming the nucleus of the team, the rest of the roster can and will evolve around them. General Manger Pat Riley has done a fairly good job of finding and acquiring role players that fit. So even if players like Mario Chalmers, Ray Allen and Chris Anderson leave for free agency, the Heat should be able to find other role players to replace them. Miami likes to run their offense with three-point shooters and athletes that can play around LeBron. His vision and passing ability maximizes their talents. There is no shortage of these role players around the league and, once again, the chance to play in Miami can be alluring bait to these types of free agents.

Contracts won't be an issue for the Heat's main trio for at least another season, but even if they do think about leaving there are very few, if any, landing spots that could be as good as Miami. Barring a catastrophic season next year this group should stay together, and if they do, they could possibly turn into the dynasty that LeBron infamously predicted they would become. Two down, six to go!