Only four teams remain, including the defending champs

Now that the NHL conference finals are underway, the defending champion Los Angeles Kings, the Chicago Blackhawks, the Boston Bruins and the Pittsburgh Penguins all square off for a chance at the Stanley Cup final. There has been plenty of excitement so far this postseason with five of the twelve previous series being decided by the "winner-take-all” game seven. Yet, these seem to be the four teams that most experts expected to be there. They are the four previous Stanley Cup Champions and have continued to amaze this season, combining for a 127-49-16 record in the regular season. The Los Angeles Kings will take on the Chicago Blackhawks in the Western Conference, while the Boston Bruins play the Pittsburgh Penguins in the Eastern Conference. As always, 100 percent accuracy is guaranteed. 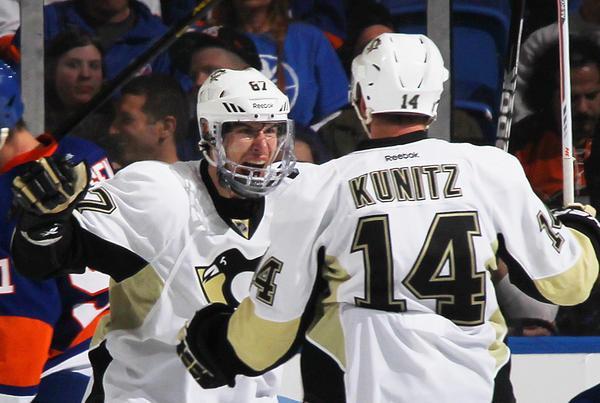 My Prediction
The Penguins will win in six games. As amazing as Boston has been this postseason, their defense has struggled. They are ranked 10th in the playoffs with more than 2.5 goals allowed per game, which is almost half a goal more than their regular season average. This will hurt Boston as their goalie Tuukka Rask will struggle to keep Pittsburg off the scoreboard. 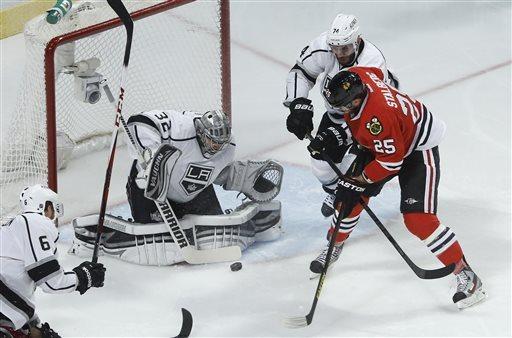 Photo: Kings goalie Jonathan Quick makes a save against Viktor Stalberg of the Blackhawks earlier in the season

Photo: Kings goalie Jonathan Quick makes a save against Viktor Stalberg of the Blackhawks earlier in the season Photo courtesy of Yahoo Sports.

Matchup to watch for
The matchup to watch for in this series will be the goaltenders. The Los Angeles goalie Jonathan Quick and the Chicago goalie Corey Crawford are ranked 1st and 2nd respectively in the playoffs in save percentage and goals allowed per game. While Chicago has a better offensive attack than Los Angeles, Jonathan Quick is the defending Conn Smythe trophy (playoffs MVP) winner and will shut down the Blackhawks if he keeps up his play. The goaltender that plays better in this series will likely be the difference in which team moves on and which team goes home.

My Prediction
The Kings will win in seven games. Even though the Blackhawks have home ice advantage for the series and the Kings are just 1-5 on the road in the playoffs, Jonathan Quick is just too good for me to pick Chicago. Also, the Kings are very experienced having won a Stanley Cup trophy the year before. Assuming Jonathan Quick plays the way he normally does this time of year and the Kings can steal a win on the road, they will win a nail biting game seven and return to the Stanley Cup Finals.

No matter which way these Conference finals go, the 2013 Stanley Cup Playoffs are shaping up to be among the best we have seen in a long time due to the experience and the balance of all four teams left at every position.