What is the most valuable player (MVP) award? Last time I checked, the MVP award went to the player who contributed most to his team's success. Judging by this rubric, Angels' rookie outfielder Mike Trout should be a runaway for this year's American League (AL) MVP award. 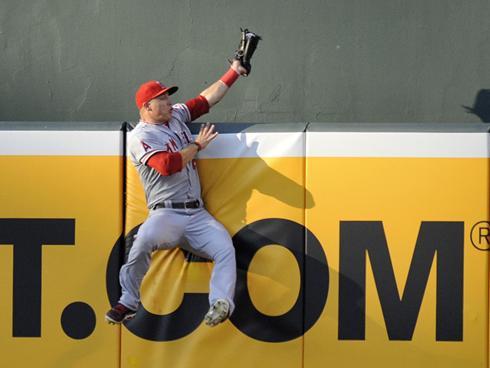 Photo: Trout was one of the best outfielders in baseball this year, routinely robbing home runs.

Photo: Trout was one of the best outfielders in baseball this year, routinely robbing home runs. Photo courtesy of Yahoo.

Let's rewind back to April 28. The Los Angeles Angels, fresh off signing Albert Pujols to a contract worth $254 million, were 6-14 in the American League West division, good for last place. Angels' brass were beginning to panic, wondering if their huge signing of Pujols was a mistake. But on April 28, things changed. Twenty-one year-old rookie Mike Trout was called up to the big leagues, and from there, proceeded to turn major league baseball into his own personal playground.

Granted, Tigers' third baseman Miguel Cabrera did become the first Triple Crown winner in 45 years, but the MVP award is about more than just the combination of three stats deemed the most important over a hundred years ago. Although Miguel Cabrera is just the 15th player ever to win the Triple Crown, what Mike Trout did, no one has ever done before.

Many Trout critics say Cabrera deserves the MVP award because Cabrera was able to lead his team to the playoffs while Trout was not. What many fail to realize though, is that Trout's Angels, who went 89-73 this season, actually finished with a better record than Cabrera's Tigers, who went 88-74. Meanwhile, since Trout's call up, the Angels' .585 winning percentage was the best in the AL. If Mike Trout had been playing for a full season, there is a good chance that the Angels would have won more games, and made it to the playoffs. Maybe then we would be watching the league's best player on the game's biggest stage.

Although Trout only played in 139 games this year, he still led the American League in steals and runs, finishing with 49 and 129 respectively. Trout also finished higher than Cabrera in the sabermetric favorite: on base percentage. Cabrera played in 22 more games this year than Trout, but Trout still scored 20 more runs than Cabrera. Even though Trout, who is considered a leadoff type hitter, did not match Cabrera's 44 home runs, Trout still managed to hit 30 in his shortened season, tying him with sluggers Prince Fielder and Albert Pujols. 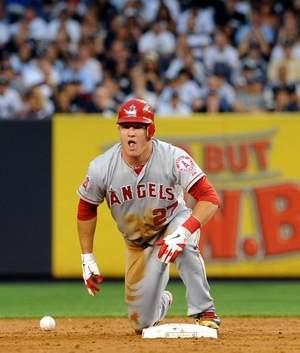 Photo: Although Trout did not play a full season, he still led the American League in stolen bases with 49.

Photo: Although Trout did not play a full season, he still led the American League in stolen bases with 49. Photo courtesy of The Daily Journal.

But talking only about Mike Trout's offense would be a sin. Mike Trout was a human highlight reel on defense, robbing home runs left and right, saving the Angels many runs and defying the laws of physics. Trout's ridiculous speed also allowed him to cover tons of ground in center field as he played Gold Glove worthy defense. Playing third base for the first time in years, Miguel Cabrera was a liability on defense for the Tigers, making the fourth most errors by a third baseman in the American League.

Mike Trout can do it all, he can hit for average, hit for power, run, play defense and throw. He is the ultimate five-tool player. Miguel Cabrera is one-dimensional, and his ability to impact a baseball game is limited when his team is in the field. Based on the impacts that they each had on their respective teams, Mike Trout's name should be called when the American League MVP is announced on Nov. 15.