Sideline Report: Where the Washington Nationals must improve

Some problems may fix themselves; others might require a trade

For a Washington Nationals team that many projected to win the World Series, the first 95 games have been a disappointment. They hold a record of 48-49 and stand seven games back of the Atlanta Braves for the National League (NL) East division lead. This Nats team that finished with the best record in Major League Baseball (MLB) last year and that many experts called "complete" during the preseason has demonstrated several shortcomings. General Manager (GM) Mike Rizzo can tackle some of these weaknesses through trades, but the current group of players will have to fix the others. 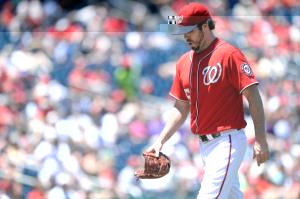 Photo: Starting pitcher Dan Haren has not had much success so far this season

Photo: Starting pitcher Dan Haren has not had much success so far this season

Even with strong outings in his final two starts before the All-Star break, Dan Haren still holds a 5.61 earned run average (ERA). He must be replaced. Rookie Taylor Jordan has impressed in his four starts, sporting a 3.32 ERA. It's worth noting, however, that he is averaging just over five innings per start, placing quite a burden on an inconsistent bullpen. Even if Jordan does succeed, acquiring another solid starter would make sense. Also, Ross Detwiler has battled injuries and has struggled to a mediocre 4.04 ERA and a poor 2-7 win-loss record. That won't cut it. He pitched well last season and was the Nats' best starter in the 2012 playoffs, so he should be given the opportunity to improve. If Rizzo does make a move it should be acquiring a starting pitcher with an extended contract and ERA close to 3.50.

The third best bullpen in the NL last year has not had smooth sailing in 2013. Its ERA of 3.51 is the eighth best in the league, which is not good enough for a team that relies on pitching to win games. Nevertheless, the relief corps has improved since opening day when it had only one lefty, Zach Duke, who has since been released. Rizzo has found far superior southpaws in the farm system in Fernando Abad and Ian Krol. One dark spot in the bullpen is Drew Storen, who can be dominant but can also blow a game on any given day. Also, opposing hitters have a high .283 batting average off of reliever Craig Stammen, almost .70 higher than last year. But there are no moves to be made for Rizzo regarding the bullpen. Ross Ohlendorf has been a pleasant surprise in long relief and sinkerball pitcher Ryan Mattheus should be returning soon following recuperation from breaking his pitching hand punching a locker. Mattheus should, at the very least, be a matchup pitcher who Johnson can bring in to get a single out. The Nats' bullpen does not dominate opponents but it has a solid 2.77 ERA over the last 30 days and a winning record on the season, so making adjustments there should not be a priority.

Make a move: Deepen the bench 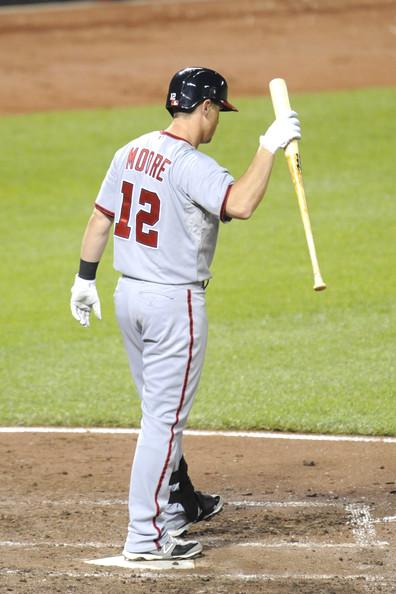 Photo: Utility player Tyler Moore has not been as productive as the Nationals had hoped

Photo: Utility player Tyler Moore has not been as productive as the Nationals had hoped

The Nationals had high hopes for Tyler Moore after his strong rookie season but he did not produce this year and was sent down to the minors. The Nats recently acquired outfielder Scott Hairston from the Cubs and he should supply much needed power off the bench from the right side. Now the Nats need to do the same for the left side. Roger Bernadina and Chad Tracy are performing considerably below their strong 2012 seasons. Right now switch-hitting Steve Lombardozzi is the only pinch hitter batting over .200. Rizzo must trade for a big left-handed bat that Manager Davey Johnson can call on late in games to drive in runs.

The starting lineup is the root of most of the Nationals' struggles this year, yet there is no change to be made. Of the current starting lineup (including Wilson Ramos at catcher), seven of them are hitting .260 or above for the season. While the team overall is hitting a meager .241, the fourth worst average in the Majors, pinch hitters and bench substitutes deserve a good portion of the blame for deflating the team average.

Defense, a strong suit last season, has been poor at times this year and the Nats are tied for the third most errors in the MLB with 67. Third baseman Ryan Zimmerman however, with a team leading 14 errors, seems to have rediscovered his throwing mechanics in recent weeks. Shortstop Ian Desmond has the second most errors but this is almost entirely because of a wild start to the season. Since then he has been solid and even went on a 59-game errorless streak. A third source of errors, Anthony Rendon, switched over from third base to second base and did made five early errors, but has improved rapidly and is becoming sure handed.

Rizzo proved himself to be patient with this young team when he shut down Stephen Strasburg before the playoffs. He will once again not force the issue and trade away top prospects for veterans at the upcoming trade deadline. But it is time for him to start being a little more aggressive because the core of the team will hit free agency in a few years. The 2013 season is in no way a lost cause. With a couple of key additions along with improved play from the bullpen and the starting lineup, the Nationals could be in the pennant race come September.

Editors Note: All statistics are courtesy of mlb.com