Silver Quill, Blair's award-winning literary magazine, is holding its first Open Mic of the 2009 - 2010 school year this Friday in the Media Center during 5A and 5B lunches. The Halloween-themed event will give Blazers a chance to perform creative material through spoken word or music. 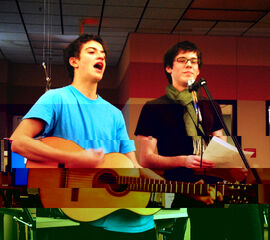 Photo: Seniors Alex Denton and Adam Detzner perform at one of Silver Quill's open mics in 2008. The first open mic of this school year will be on Friday.

Photo: Seniors Alex Denton and Adam Detzner perform at one of Silver Quill's open mics in 2008. The first open mic of this school year will be on Friday.

Open mics allow students to show off their creativity through multiple mediums, according to Silver Quill Editor-in-Chief Emily Jones. "Students can sing, play instruments, read stories or essays and recite poems," she said. "Some pieces are original, but most are just favorite pieces selected by the performers." Blair musical groups InToneNation and Those Guys will also be performing at the open mic, according to club sponsor and English teacher Miriam Plotinsky.

The Media Center will be decorated to match the Halloween theme, according to Plotinsky. "There's going to be Halloween decorations and everything, we're going all out," she said. Jones added that in addition to decorating the Media Center, Silver Quill will be providing free food for students who attend or perform in the open mic.

Silver Quill has been hosting open mics regularly since last November, a tradition the group plans to continue this school year. "We plan to host four to five this year," Plotinsky said. The open mics are held to reinforce Silver Quill as an outlet for creativity within Blair, as well as to encourage students to develop and flaunt their artistry, according to Jones. "Silver Quill hosts open mics to allow Blair's student body the chance to express themselves through music and spoken word… and to encourage Blair's creative community [to] show off its talents," she said.

Both Plotinsky and Jones encourage students to attend the open mic on Friday and watch their talented peers. "People should go, because other than the fact that it's entertaining and supportive, you get to see new sides of people," Plotinsky said. "We have a lot of surprise talent."

Interested students should submit their names and act to boxes located in classroom 141, the English Office and the Media Center to sign up for the open mic. Students can also email the magazine at silverquillmag@gmail.com.