Downtown Silver Spring flourished yesterday as an estimated 15,000 people came to the second annual Silver Spring Jazz Festival on Ellsworth Avenue on the lawn across from the Majestic Cinema, according to police officers. High school jazz bands played on colorful floats, sponsors set up booths along Ellsworth and several world-renowned jazz artists, including Wynton Marsalis, performed on a stage erected on one side of the lawn.

Marsalis, a New Orleans native, and County Executive Doug Duncan spearheaded an effort to gather donations for Hurricane Katrina relief in which an estimated $22,000 was collected, according to American Red Cross staff. Throughout the event, staff members weaved through the throng carrying buckets to collect money for the American Red Cross to donate to victims. In addition, the festival was dedicated to jazz bassist Keter Betts, who lived in and gave back to the Silver Spring community. 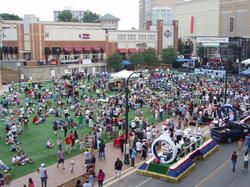 Blazers joined the mass of people; they came to enjoy the music and to spend time with friends. "I needed to get the eclectic taste of jazz," said sophomore Molly Martinez. Several junior girls were relaxing on the grass turf. "It's just a fun thing to do on a Saturday," said junior Willa Reddy. Freshmen Abraham Murrell and Jacob Hershman were excited about the jazz, being with friends and the flashlight and pen handouts.

The festival began in the afternoon with a jazz competition between bands from Albert Einstein High School, James Hubert Blake High School and the Jazz Academy of Music. The judges announced the Jazz Academy as the winner, but all three schools exhibited talent and soul. Einstein had two adept percussionists who moved fluidly with the beat. Blake had an electric guitar soloist, which made them unique. Several saxophone players from the Jazz Academy performed complex solos, clinching their victory. The judges, one of whom was Wynton Marsalis, had an "extremely difficult discussion" said Murray Horwitz, the Master of Ceremonies, but awarded the Borders Jazz Times Trophy to the Jazz Academy's music director, Paul Carr.

After the competition, harmonica virtuoso Frédéric Yonnet played onstage with his band. He jumped and twirled in front of the microphone, lively pursing his lips against the small instrument. During one song, he started a call and response with the audience. "How about the people in the back there?" he laughed out at the crowd. "You're not doing much."

The warmth that Yonnet radiated continued as the Ron Holloway Group came on to perform. They played a mixture of smoother, softer jazz and upbeat songs. In between two songs, Holloway chuckled at a man in the audience who she warned would break his chair if he kept dancing in it. Later, Holloway invited vocalist Michelle Walker on to perform several songs with the band. "Hey Silver Spring, how are you doing?" she called out as audience members cheered and clapped.

Following the Ron Holloway Group, Horwitz, the MC and the director of the AFI Silver Theatre, announced Carol Slone. "This lady certainly has a claim to be the best jazz singer ever known," he said. Slone walked onstage with a confident, powerful stage presence for her small stature. Her soft, relaxing voice carried throughout the block. "I couldn't care less," she crooned in one tune, shrugging her shoulder and waving her arm. 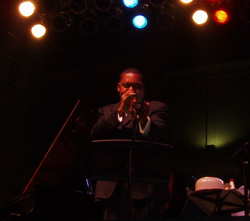 Photo: Wynton Marsalis, a nine-time Grammy Award- and Pultizer Prize-winner, plays a tune on his trumpet during the second annual Silver Spring Jazz Festival on the night of September 10.

Photo: Wynton Marsalis, a nine-time Grammy Award- and Pultizer Prize-winner, plays a tune on his trumpet during the second annual Silver Spring Jazz Festival on the night of September 10.

Co-host of the Smooth Jazz morning drive and keyboarder and composer Marcus Johnson performed loud pop and funky jazz next. The stage lights switched from pink to red to orange to blue as the sun set on the scene. Johnson's dynamic personality showed through as his fingers flew on the keys and as he called out to the audience. "Do ya'll think we're about to get busy here?" he cried amid applause. Then later, "Are ya'll having fun? That's what I wanted to here! To all my people in the garage!" Spectators had gathered on the parking garage across from the lawn on Ellsworth Drive to get a better view. Johnson also recognized several Katrina victims in the crowd and called them up on stage as people clapped.

As Johnson exited, anticipation mounted for the grand finale: a performance by nine-time Grammy Award and Pulitzer Prize-winning trumpeter Wynton Marsalis. Marsalis played a smooth and calming form of jazz. He could make many different noises with his trumpet; during one song called "Big Fat Hen" he made chicken-like sounds. Audience members were swept into the spirit as people stood up to dance or wave handkerchiefs. Elderly people swayed slowly and young kids taught each other swing-dance moves on the lawn. At the end, the classy Marsalis congratulated the high school bands and thanked everyone for coming.

Gradually, the masses trickled away. Only the hardcore jazz fans and older people remained for a jam fest past 10 p.m. Yonnet and Holloway came back on stage with Marsalis to perform solos. Slower blues and jazz dominated the hour, saying goodnight to the Silver Spring community.