"The Silver Pass" public art project was held at the Georgia Avenue and Blair Mill Road intersection this Friday. The project, which incorporated the efforts of 11 Blazers, includes four large mosaics and more than 300 feet of painted panels.

In a public ceremony, the apprentice artists and Jan Goldstein, the "Arts and Block" director, unveiled the mural and presented certificates to various sponsors and to the artists themselves. The mural, which covers both sides of the Georgia Avenue underpass, is composed of 58 square panels painted in blues, reds and greens. It features six small rectangular mosaics as well as four larger mosaics on each end, all done with an art deco motif. The large mosaics each depict a different mode of transportation so that the mural can incorporate some of Silver Spring's history, according to lead artist muralist Byron Peck. 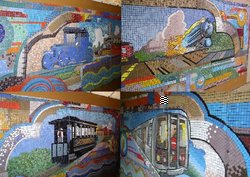 The ceremony, which was forced to move into Moorenko's Ice Cream Cafe due to the weather, featured speeches from Goldstein, Peck, co-lead artist Carien Quiroga and honorary guest Barbara Duncan. Other honorary guests included State Senate candidate Jamie Raskin and State Delegate candidate Aaron Klein. "I remember when this place was not as nice," said Klein, "and it is so personally gratifying to see the progress we have made. I think this [project] is a great thing."

The "Underpass Project" was actually worked on by both the original "Arts on the Block" program, which made individual mosaic pieces under the direction of Quiroga, and the direction of Peck's group of artists. The two branches of "Arts on the Block" merged together in Feb. to finish the mural. The Underpass part of the program was a group of 12 students, 11 of whom were from Blair. "This was a great experience," said junior Melanie Samuels, "and it's great that this [ceremony] will get people to recognize the mural. Hopefully they will be able to appreciate it better."

Peck mentioned during the ceremony that the mural was the first part of a three-stage project which will all focus on redecorating the underpass and train station above it. He hopes next to decorate the vertical columns supporting the bridge.