Although the Montgomery County Department of Public Works and Transportation (DPWT) has not yet completed construction of one of its latest undertakings, the Forest Glen Pedestrian Bridge, the project already seems to have been a mistake. Its elaborate design no doubt cost County taxpayers much more than a bridge should — provided such a bridge were even necessary. The bridge, according to Project Manager Joe Markovich, is nearly complete — too near completion to abandon the project. Yet the fact that the bridge was built should serve as a cautionary tale to taxpayers and county officials alike. 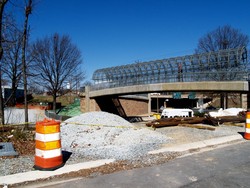 Unfinished business to attend to

Photo: The pedestrian bridge along Georgia Avenue at the Beltway, still under construction.

The pedestrian bridge along Georgia Avenue at the Beltway, still under construction. Photo courtesy of Zoe Norvell.

The bridge, which has been in the works since 2003, will eventually cost Montgomery County taxpayers slightly over $7.7 million, according to data from the County. The majority of this sum is to cover construction costs, which come to $5.597 million. This cost would have surely been less were it not for the metal archways, decorative stonework finish or numerous other adornments that line the bridge, offering little utility other than aesthetics. Beautifying shopping districts is one thing — it is a boon to local businesses and has worked wonders in revitalizing Downtown Silver Spring, but the bridge was built near townhouses and a Metro station — not exactly a potential shopping district. Surely, commuters could stomach a more Spartan bridge for the few seconds most drivers pass it; it is not as though the intersection of I-495 and Georgia Avenue was renowned for its beauty. Yet DPWT, in its infinite wisdom, has decided to spend millions of dollars of taxpayer money on the construction of an elaborate bridge that most commuters will give only the briefest of glances.

The construction of the bridge itself was an even greater blunder. According to Markovich, the County's primary reason for building the bridge was to assist pedestrians in crossing the Beltway on-ramps, which, he added, were rather dangerous. Given this, the construction of the bridge would have been justified, were it not for one confounding variable: a method for safely coming to and from Silver Spring, the mass transit system, already exists. Few commuters would ever need to walk from Downtown Silver Spring—which is served by a Metro stop—to another Red Line stop at Forest Glen, since unless a commuter's trip is only one stop, one would save little to nothing in fare by walking the distance. Fewer still would walk the entire distance instead of taking the Metro or Ride-on buses that serve both areas and extend even further up Georgia Avenue.

Surely, some would argue, there are people who live close to the Forest Glen Metro stop but inside the Beltway. Wouldn't the bridge help them? Of course it would. The bridge would ease the commutes of those who Metro to work but do not live within a reasonable distance from the Silver Spring station. These residents, however, are fairly few in number — too few to justify the construction of a bridge apparently built solely for them. Besides, most of them are within easy walking distance of a bus stop, from which they can catch a public bus that will drop them off at their Metro station of choice.

The intersection of University Boulevard and Colesville Road — literally outside Blair's door, is still one of the most dangerous in the county. The intersection, due to its proximity to one of the area's largest high schools, also receives heavy foot traffic; consequently, it seems that Blazers cannot go more than a couple of months without hearing Principal Phillip Gainous announce that there has been an accident involving a student. Many students who walk home must cross the Beltway on University Boulevard or Colesville Road — both of these intersections are just as dangerous as the intersection with Georgia Avenue, and both pose a substantial hazard to students on their way to and from school. Yet no spectacular bridges or pedestrian overpasses grace Four Corners; the only safety enhancements that the County has doled out to Blazers are a few sets of timed crossing signals that count down before changing. Instead of providing Blair or other schools with additional safety enhancements that would surely keep students and drivers safer, DPWT has squandered $7.7 million in taxpayer money on what is essentially an elaborate bridge to nowhere.