Graduate houses decades' worth of Blair yearbooks as unique antiques

It is safe to predict the eventual fate of the 2008 Silverlogue yearbook, soon to be delivered to Blair students. It will end up a collector's item.

One of those collectors is likely to be 1970 Blair graduate Donna Guiffre, who has three rooms brimming with high school yearbooks inside her antique-filled Germantown home. Her collection now amounts to more than 2,000 yearbooks from 48 states, including Silverlogues covering 50 of Blair's 79 years as a school.

Covers of the old Silverlogues can be viewed on Guiffre's web site, and she is willing to send anyone a scan of any photo or page from her collection of books by e-mail - free of charge.

"Having a website that can replace missing pages and memories is definitely convenient," says Cassie Cummins, editor of the Silverlogue for this year's student body. "It's an added protection to the memories we work so hard to preserve."

Earlier this year Guiffre added several more Silverlogues as part of her biggest transaction yet: a total of 320 yearbooks purchased from another local yearbook aficionado, Roy Heintzelman.

The opportunity arose after Heintzelman sold his County Cupboard Tea Room café in Kensington, where he kept his large collection of yearbooks available for customers to browse. Heintzelman had managed to find 76 of the 78 printed Silverlogues, missing only the 1933 and 1943 editions.

Over the years, numerous Blair graduates frequented his café, partly for the chance to check out the old yearbooks. Although an Einstein graduate himself, Heintzelman grew attached to the Silverlogues, which take their name from Silver Spring High School, the original name of Blair.

"I found Blair to be particularly interesting and full of history, and enjoyed collecting the Silverlogues more than books from other schools," he says.

When Guiffre heard Heintzelman was selling the café, she contacted him about buying his collection. He agreed to part with his duplicate Silverlogues but decided to hold onto the others for sentimental reasons. Guiffre, a computer programmer by profession, is intrigued by the possibility of connecting old grads to their school-day memories via her web site. 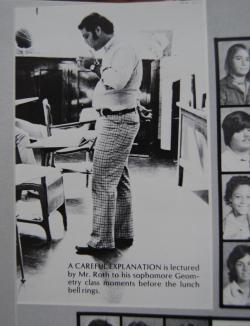 "I like reuniting people with their past," she says. "That's the main reason I became a collector. It's been my quest."

It is also the reason that she charges nothing for strangers to browse yearbook pages or request specific scans. "These pictures belong to the public," Guiffre explains. "I can't even begin to imagine asking anyone to pay."

Although Guiffre's massive collection suggests a lifelong passion, it came about only by coincidence.

During the 1970's Guiffre began researching the genealogy of her family. Without computers to simplify the process, she visited courthouses and used library phonebooks to write to every address listed below "Dupre," her maiden name. The hard work paid off. "One day, I got a letter that said, 'Hello cousin, this is your lucky day,' " Guiffre says.

As it turned out, Guiffre's newfound cousin possessed a detailed family album that dated back to the 1850's, containing pictures, wedding invitations and birth announcements among its extra treasures.

Suddenly motivated to pursue genealogy on a broader investigative scale, Guiffre began to buy old family photographs and tintypes that she ran across in flea markets, antique stores and auctions.

"It broke my heart to see those pictures separated from the families," Guiffre explains. "I thought that in my hands, at least they were one step close to getting back where they belong. My intention was to track down the owners and reunite them."

It wasn't until the rise of the Internet in the 1990's that her plan really took flight. Through online sleuthing, she has been able to track down families and return their memorabilia.

In the process, Guiffre began to amass mementos by the boxful; often these boxes contained yearbooks. "Yearbooks were commonly with the pictures, so I started to collect them by default," Guiffre says.

At this point in time Guiffre no longer views yearbooks as an incidental acquisition. In fact, yearbooks are now a primary focus of her hobby. "After a while, I said, 'Gosh, that's a lot of yearbooks!' " Guiffre says. "I decided to do something with them."

Roy Heintzelman is still searching for the 1933 and 1943 volumes of Blair's Silverlogue yearbooks. He is willing to pay upwards of $200 and can be reached at kensingtonnite@hotmail.com .