It is the first day of ninth grade, and a group of anxious freshmen girls nervously filter through the door to room 162. But as soon as their English teacher begins to speak in a warm Southern accent, the girls immediately feel at ease. "Y'all are my babies," Dr. Dana Simel tells them, "And I'll do anything to protect you." 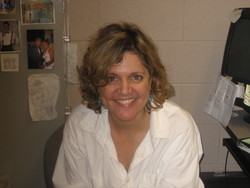 Photo: After 17 years in higher education, Dr. Dana Simel is having a blast teaching English at Blair.

Photo: After 17 years in higher education, Dr. Dana Simel is having a blast teaching English at Blair.

Eight months later, the same 10 or 12 girls are scattered throughout Simel's classroom during lunch for a mix of homework, games and gossip. Simel sits at her computer, alternating her focus between the papers she is grading and the plethora of conversations around her. This lunchtime hullabaloo typifies the comfortable, laidback and positive atmosphere Simel provides in the classroom – whether in an academic or social setting.

Simel's passion for the educational process doesn't stem from an inspirational mentor, but from a lack thereof. Simel was "bored" in high school, she says. "I always thought I was smart, but wondered why I was tuned out." Uninspired by her teachers, she "thought perhaps I could do it a little better."

After earning a PhD in Educational Leadership from Ohio State University (OSU), Simel spent nearly two decades teaching education courses at various universities – until almost 4 years ago when she decided it was time to go back to school – high school. "After 17 years in higher education, I felt I'd lost the kind of ideals which drew me into teaching in the first place," she explains. "If you're away from teaching for so long, you don't know what kids today are like...I wanted to learn it"

Simel is delighted that she ended up at Blair this year – she almost didn't. Her original intention was to work in the DC public school system, but after applying for a position last February, she still had not been assigned a school in late August. "I was accustomed to an urban setting, that's what I'm comfortable with, but I was so frustrated that by the third week of August, I just got in my car and drove to the Maryland Human Resource Office," she recounts with a hint of frustration.

By chance, a woman at the office gave her an impromptu interview, and mentioned that representatives from "something called the CAP program" were looking for an English teacher. Two days later, Simel landed the job and prepared to start at Blair, teaching 9th grade CAP English and 11th grade English.

As a teacher, Simel sees distinct differences in her students' academic levels but maintains confidence that everyone can succeed. "Every child is educable," she says thoughtfully, contemplating her teaching philosophy. "They can be brought along the same route, but perhaps at a different pace." She credits "incredible resources" at Blair – classroom composition assistants in particular – as pertinent to her students' achievement.

When Simel is not at school, family is a top priority. Her 18-year-old son plays golf at Emory. "One of my biggest hobbies is traveling around the country watching golf tournaments," she jokes. Simel also has five siblings and loves being an aunt to their children. "It's so cool watching them grow up, and become more independent," she says.

Simel's family-oriented personality extends to her love of dogs. She volunteers regularly at animal shelters, sometimes providing pet transport, and often keeping foster dogs. Her own pooch, Marcus, is a black coonhound – what Simel describes fervently as "a bloodhound with long ears – very sleek."

If Simel were not teaching, she says, her number one dream job would be a dog groomer, followed by a writer or a forest ranger. For now, Simel loves her job at Blair, though her students are quick to point out her biggest pet peeve: excessive singing in class. "It drives me crazy," she says.

Nonetheless, she herself is singing – singing her students praises. "I just love them. They're great," she says, beaming. Brightly animated and always passionate, this is a woman who believes in the power of education.