Remember the leather-clad, failed-a-grade kid who put his feet up on the desk in detention and cut his nails with a rusty pocketknife? Or the kid who leaned against his Mercedes, beautiful cheerleader girlfriend on one arm and expensive imported beer dangling from the other? "Sin City" is the guy who beat those kids up, took their lunch money, then held them at arm's length while the former parties flailed about helplessly. 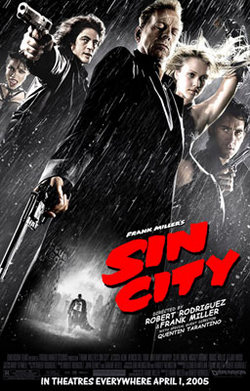 Photo:
"Sin City" oozes cool. It inhales cool, holds cool in its lungs, and lets cool waft out over its teeth. It plunges headfirst into a pool full of cool, then comes up gasping for air, spitting and dripping cool. It beats cool to death with a pipe, and the corpse bleeds cool. "Sin City" was allowed to select three items to take with it to a deserted desert island, and it chose hair gel, a pair of Oakleys, and a sarcastic smirk.

"Sin City" may just be the coolest movie ever made. But does that make it good?

Based on the graphic novel series by Frank Miller, who also steps in to direct alongside Robert Rodriguez and Quentin Tarantino, "Sin City" is comprised of a series of loosely connected vignettes. Like any good comic book, the vignettes reject any sense of logical chronological progression, which makes it difficult to identify them in any kind of hierarchal order. Haritgan (the certainly appropriate Bruce Willis), a by-the-books cop drowning in a sea of crooked ones, saves a little girl from being raped. The rapist-to-be, unfortunately, is the son of well-connected Senator Rourk (a sleazily-mustached Powers Booth), who twists the situation around, clearing his son (the creepy Nick Stahl) and blaming Hartigan in the process. Marv (the suitably grainy, and unfortunately surnamed, Mickey Rourke), a paroled hooligan with a "condition," is framed for the murder of a prostitute, spurring a quest for vengeance that leads him through all levels of filth. Murderer-on-the-run Dwight (the slick and convincingly dangerous Clive Owen), running protection on girlfriend Shellie (Brittany Murphy), follows a very drunken Jackie Boy (Benicio Del Toro) to the area of town which is run by prostitutes, who expose Jackie's dangerous secret.

The meat of these three separate but strangely connected plotlines is presented via character monologues, which are only lame for the first five lines or so. That's the magic of Miller's work here: On the surface, there are numerous laughable elements in the film. Black and white, in this day and age, is the clear stamp of a movie that is begging its audience to take it seriously. And the sporadic color elements? How faux-artsy can a single movie get? But it never reaches that level. Never even scratches the surface. Because what "Sin City" does is it sucks you in. It's like the tide at the beach: You wade in expecting to stay within easy reach of your towel, but one-two-thirty waves later you're standing a mile and half down from anything you recognize wondering "How did I get here?"

All this lavish praise does not seek to underscore the sex, violence, or downright skin-crawling creepiness present in Miller's world of miscreants. Make no critical judgment errors: This is not a mere peek at the seedy underbelly. "Sin City" is more like a knife taken to the seedy underbelly to expose the entrails, and a lot of blood is spilled in the process. Despite this, and probably yourself, it's easy to get immersed in the sheer visceral beauty of the beast. "Sin City," even as far a cry from a shining moral beacon as is physical possible, is still a stunning cinematic achievement.