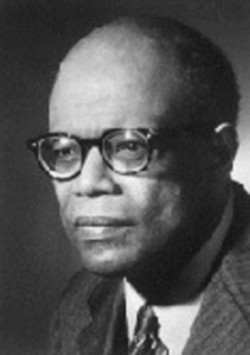 Photo: Sir William Arthur Lewis, a pioneer in economics and the first black to receive the Nobel Prize for a field other than peace.

Photo: Sir William Arthur Lewis, a pioneer in economics and the first black to receive the Nobel Prize for a field other than peace.

Sir William Arthur Lewis was a pioneer for his race as well as a pioneer in the study of economics. He was the first black individual to receive the Nobel Prize for a field other than in peace. In 1979, he was awarded the prize for his study of the economic structures of developing countries and for his books on achieving a governmental structure and stable economy. Lewis worked throughout his lifetime to develop models for business between countries of varying economic stability.

Lewis was born in 1915 in the British West Indies, where he received his primary education. He later attended the prestigious London School of Economics on scholarship, and in 1937, he received his PhD. Lewis lectured at the school until 1947, when he took a teaching position at the University of Manchester as an economics professor until 1958. At that time, he became the principal of the University College of the West Indies, after which he taught at Princeton University.

During his lifetime, Lewis also advised the governments of many developing nations and wrote a series of books on the principles of economics. One of Lewis' major projects was to establish the Caribbean Development Bank, which he helped begin in 1970. The bank's purpose was to lend money to its "borrowing members" to reduce poverty in their respective countries and to improve their economic situations. Lewis was the bank's first president, and under his direction, the bank worked to finesse its developmental and financial skills. In 1963, Lewis was knighted, and in 1991, he died and was buried in a college named after him.