The minimalist, the colorful, the overwhelming: music networking sites to check out

With the expanding popularity of music networking sites, the Internet has replaced radio as the dominant source of new music over radio. As a result, the rise of Facebook, YouTube and MySpace has launched an era of interconnectivity and expression - and anyone with Internet access can connect. Although a plethora of music social networking sites are available, Silver Chips Online is here with a review of some of the most popular, overhyped and underrated music networking sites. 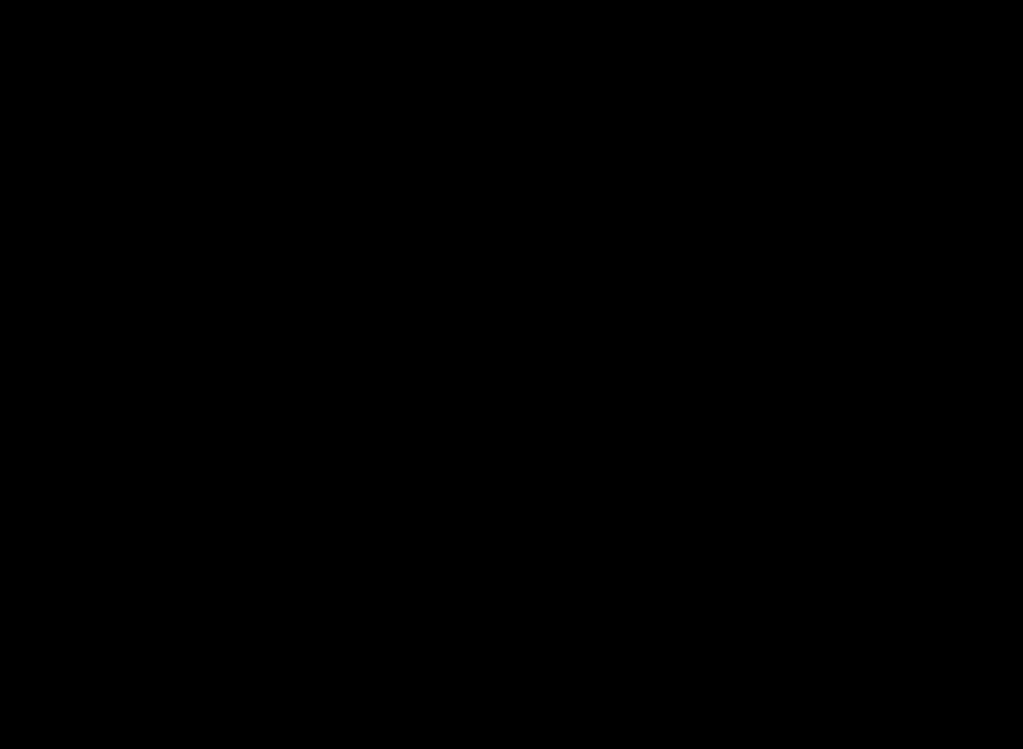 Launched back in 2004, imeem is another social media heavyweight with over 25 million reported visitors a month and over 65,000 new users per day. The site, with a format mixed between Facebook and YouTube, is clean cut and easy on the eyes. Sign-up is a snap, and new users are instantly given a MySpace/Facebook-esque "dashboard" to widgetize as well as a profile page to personalize and share. Users can browse top hits, discover what's new and check out the top news in the music world spotlight. Besides just music, imeem users can view videos, photos, some TV shows, blogs and polls. Visitors without accounts can still access most of the website but are restricted from commenting, rating and posting content, and accessing the newest content.

Imeem users interact with each other through friend lists as well as sharing playlists, which can incorporate any type of media from songs to photos to self-made animations. These user-created playlists are easy to make. Hit the "Create" tab at the top of the dashboard, name the new playlist, search up an artist or song and just add it. Or, for people just looking for music, use the search tab and check out playlists with your favorite bands. Your own personal media tracker will also remember the content you view so you can go back through your history or share it with others.

Founded in 2002, Last.fm boasts a user base of more than 21 million active users who hail from more than 200 countries. The site's crisp design is intuitive - straightforward tabs on the left and a basic header on the top make navigation and searches simple and easy. The video and music players embedded on the page are sleek and unobtrusive, although the user-added YouTube videos are often raw and pointless. 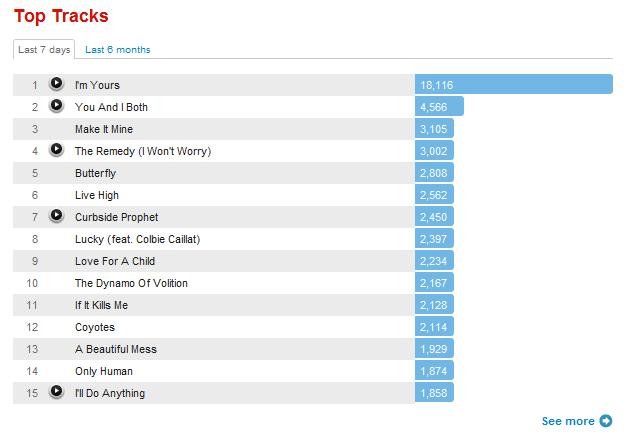 Photo:
The site allows user to connect to streamed radio stations, listen to individual songs, watch videos and comment on site features. Select tracks that are authorized by artists can be downloaded. Users build a detailed profile of their music preferences through the software Audioscrobbler, which discerns musical taste by noting the songs a user plays through radio streaming, on the computer or through various portable music devices. In other words, the site keeps track of the user's iTunes plays to create detailed lists analyzing most played tracks and albums. It then uses this data to recommend other songs or artists that the user would possibly enjoy.

Last.fm artist and track pages include forums where users can comment and discuss music, allowing for user interaction - it also calculates two friends' "musical compatibility." Also featured on the site are event notices, where users see the latest concerts or shows and message others who are interested in or attending these events. Users can pull up charts of the bands and artists most listened to on Last.fm, and view journals under different artists. Last.fm has a wide range of music from many different artists, but features tracks that are strong radio presences, and often missing the overlooked gems on many hit albums.

Yahoo's Internet radio service, LAUNCHcast, is available to anyone with a Yahoo account. LAUNCHcast allows users to create personal radio stations or playlists of songs tailored to their musical tastes. They can customize their own stations, share these with others and even receive music recommendations based on others' tastes. The personalized station begins when users check off their favorite artists and genres from a provided list, and then rate music either out of four stars or 100 points. LAUNCHcast uses these ratings to create a station of songs based on each user's favorite genres, artists and tracks. 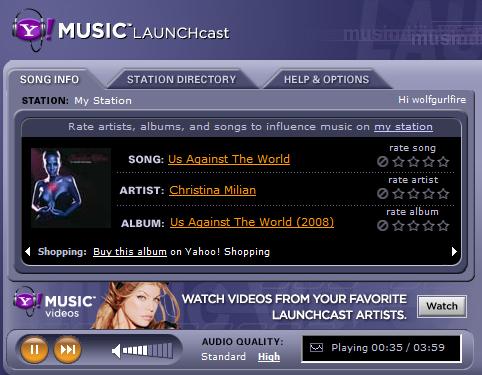 Photo:
The video player, not part of LAUNCHcast but available on Yahoo music, also functions as a customizable station and runs embedded in the web browser. Only music streaming requires a smaller popup window. The search feature is available only from the original site, which means that two windows need to be open to search for specific videos and interesting features.

The site design is easy to pick up, but much too cluttered. Many of the features, although decorated nicely on the site with animation and flashy graphics, are bland and too centered on limited radio streaming. Users can pick and choose what songs are played on their station, but cannot play songs on demand - part of LAUNCHcast's "non-interactive" license.

LAUNCHcast also suffers from frequent interruptions by advertisements, generally 30 seconds long. The site is further marred by misdirected links. Attempting to access the page for a certain track can direct all the way back to the general artist page, and clicking the "play my station" tab can bring up the Yahoo music home page, cluttered with "Top 100" lists and interview footage. But the real kicker is that LAUNCHcast is only usable in Internet Explorer, showing an irritating lack of adequate browser support.

Live365, launched way back in July 1999, is the world's largest Internet radio service with over four million visitors a month and a user base that spans throughout over 150 countries. Its thousands of radio stations range in every music genre from the popular to the unknown. Users can choose between recommended radio stations such as "Grey FM," which covers a variety of common pop and rock, "Digital Vinyl," which covers techno and dance themes, "Crazy Al's Rare Oldies" or more obscure channels such as the Mediterranean "Voice of Macedonia." 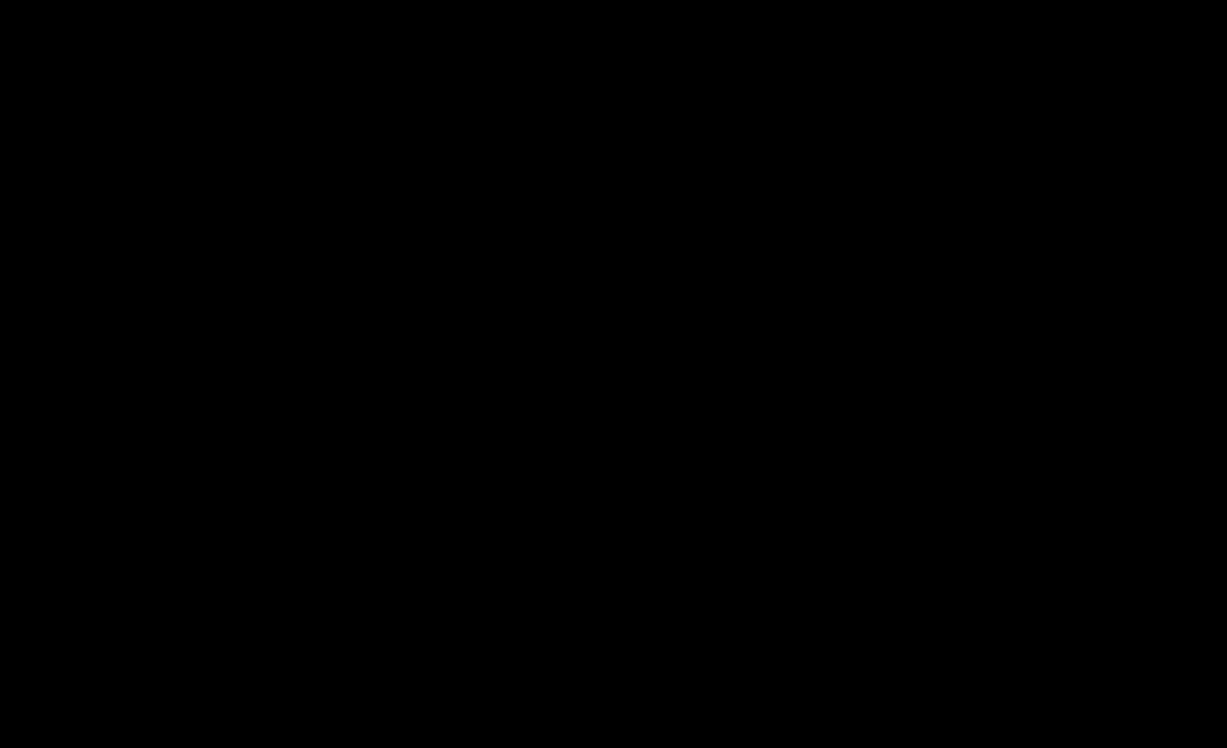 Users can also create their own radio stations and even stream their own audio broadcasts through Live365. More popular self-made DJs can even earn money from the site. Live365 members share their favorite music and discuss their favorite music genres at the Live365 community forum. However, Live365 does not provide features beyond basic music stations to its audience. With its unappealing layout and limited appeal to the large majority of social networkers, Live365 will probably remain just a large collection of Internet radio stations for most users as opposed a creative and engaging music network.

At first glance, Musicovery seems like a simple mp3 player embedded in the browser. But once the small pad is activated, the player shifts to the left and a vibrant web of interlinked songs appear. The interface is fun to play with, especially with the multicolored music web and rings of color that appear when the cursor hovers over each song. 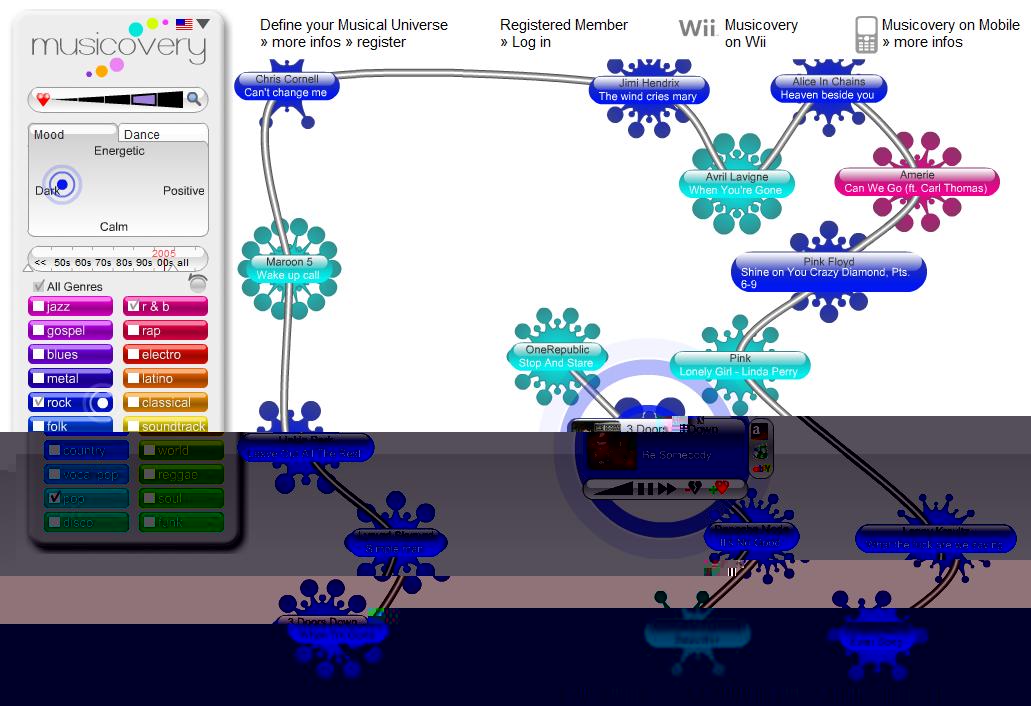 Musicovery allows users to discover songs based on their mood - somewhere between the categories of dark, energetic, positive and calm - or dance tempo, as well as any preferences for genre and time. With basic preferences indicated on the mp3 player panel, Musicovery generates a web of songs. As the user goes through the music, the web of interlinked songs changes based on what songs the user skips or rates.

The layout of the site is vibrant, with color-coded genres and songs appearing on the web as splotches of bright color. But the site feels cluttered, and although the graphics look professional, the text is often difficult to read.

The preliminary selection of music has its share of glitches - sudden deselecting of genres, or jumping to songs in genres that are not selected. The dynamic playlist that allows user to skip to different songs is more than worth smoothing out the kinks. The features are simple, lacking video streaming capabilities or user networking, but allow users to intuitively find music that matches their mood.

Pandora, created by the Music Genome Project, is an Internet radio service that recommends and plays tracks that are musically alike to songs and artists users enjoy. Users are prompted to enter a favorite artist or song, and Pandora creates a "radio station" based upon that selection. Each piece of music in the station is selected based on similarities in over 400 musical attributes such as rhythm syncopation, lyrics and vocal tone. Users can tune their personal stations by thumbing up or down each track as it plays to improve the quality of Pandora's prediction in track selection. 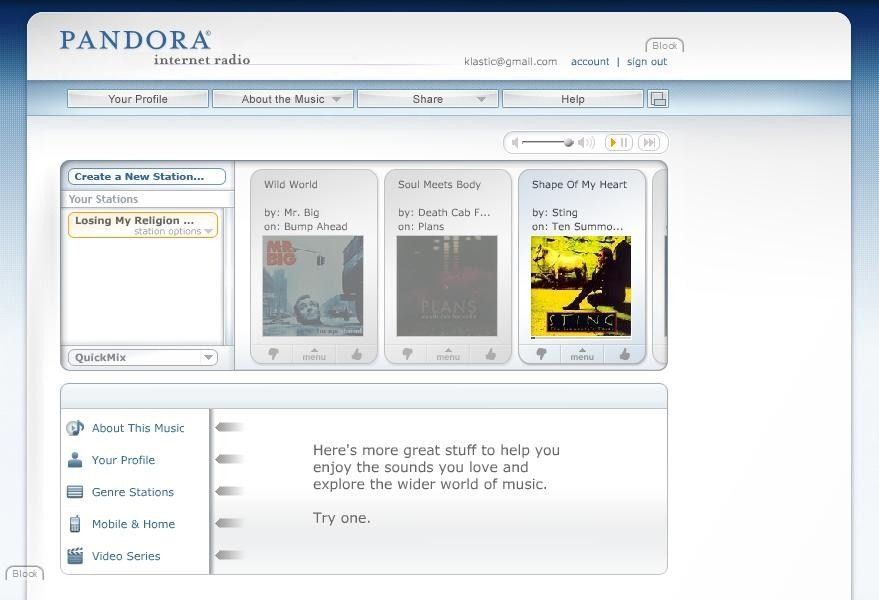 However, Pandora's music player format has plenty of limitations that cut back on the usability. Like a real radio, there is no way to rewind or repeat a track. There is no play-on-demand service: many songs by certain artists are not available on Pandora and users are restricted from playing songs from the same artists too many times within a certain time period. Pandora, available just to American users to begin with, only provides basic features of sharing and listening to radio stations with friends. Overall, due to its clean, minimalist format but lack of versatile customization, social features and expansive user base, Pandora is more suited for users looking for a plain and straightforward site to listen to some music and discover new artists without the social fuss.