Sitting down for what is right

Before the 2016 National Football League (NFL) season began, standing for the national anthem was, from professional stadiums all the way down to small grass high school fields, a given. Now, by virtue of Colin Kaepernick, a quarterback for the San Francisco 49ers, the national anthem has become another way for people to protest injustice.

Kaepernick taking a knee during the national anthem prior to a preseason football game has sparked national debate over what the anthem means, what constitutes an appropriate form of protest and even what our rights are as citizens. When Kaepernick first sat for the anthem, he told NFL Media NFL Media that he refused to stand for a country which oppresses people of color. His protest has spawned national praise, criticism and anger, as well as imitation from numerous other athletes at all levels of competition. 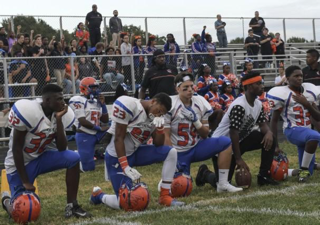 Photo: Watkins Mill players and fans take a knee for the national anthem before a game against Damascus.

Photo: Watkins Mill players and fans take a knee for the national anthem before a game against Damascus.

As more and more people begin to follow Kaepernick's example, the protest has found its way to Montgomery County Public Schools (MCPS). As nearby as Watkins Mill High School, students have taken a stand against inequality in America. Several players on the school's football team, including all the captains, took a knee on the sideline during the playing of the national anthem at their second game. The players intended to join the commentary about the direction the country is headed. According to the Washington Post Washington Post, Watkins Mill's starting quarterback Markel Grant said, "We just wanted to make a statement that America is not what you think it is." The protest continued before a recent Watkins Mill game against Damascus. This time, however, nearly the entire team, not to mention almost all of their fans, listened to the anthem from one knee, continuing the silent conversation about inequality.

While many disagree, Watkins Mill players believe the football field is a great place to recognize social issues. "I think it's a great place to have the discussion. Football is America's sport. If football players do it, it's the best way to get attention," Watkins Mill senior Brian McNeary told the Washington Post Brian McNeary last week during practice. Grant says that the captains kneeled to call attention to important issues raised by Kaepernick, such as police brutality and racial inequality. Watkins Mill coach Mike Brown told a player that "the choice [to kneel] is yours." 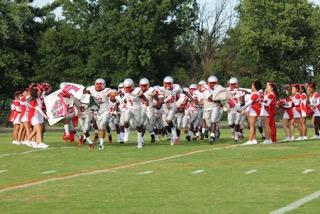 Photo: Many Blair athletes, including Cliff Carter (Number 1), are still unsure if they would ever join the protest of the national anthem.

Photo: Many Blair athletes, including Cliff Carter (Number 1), are still unsure if they would ever join the protest of the national anthem.

The Cheerleaders and Poms team were the first to take a stand at Blair. Both groups took a knee for the anthem during Blair football's game against Churchill Friday, September 23, taking time to plan their actions beforehand. "We wanted to stand up for Black Lives Matter and speak out against brutality. The anthem was made for the white man and not everyone," junior cheerleader Megan said. The cheerleaders were determined to kneel no matter what. "I don't know how to explain how proud I was because no one cared about any consequences that might've happened. We cared about the message we wanted to get across," senior cheerleader Ashley remarked.

The Poms team spoke with their coach prior to the game. "Coach was on the same page as us. She said everyone has the right to express what they believe in," senior pom Ellen said. Coach Makeyda Hilliard opted to let the team figure out what to do. "I have no comment as this was a decision that the ladies on the team made," she said. Poms members were not required to kneel and now, Poms is in the process of exploring other ways to express their stance. "We will most likely continue to protest but are considering other ways of doing it besides kneeling. We haven't really established yet what we will do and if it'll be for the remainder of the season," senior pom Clara explained. 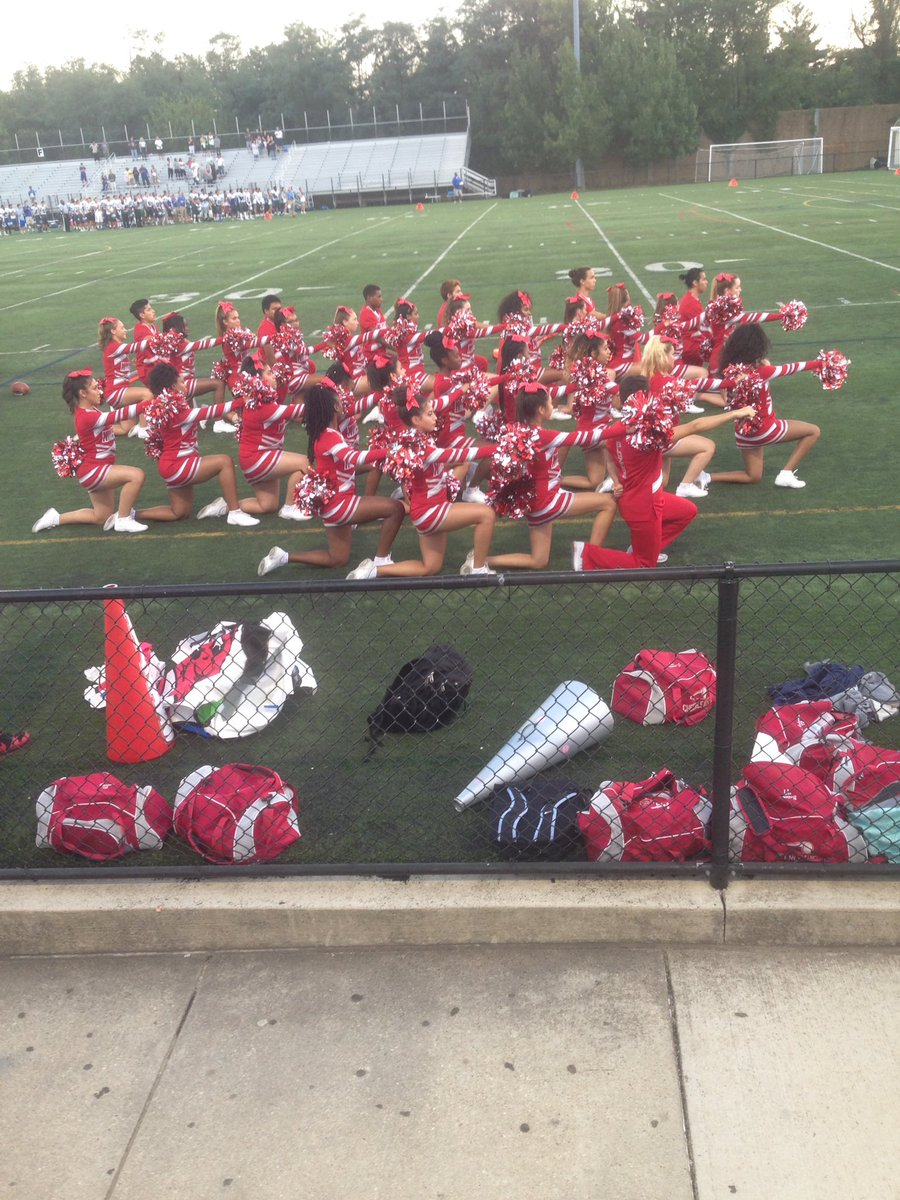 Photo: Blair Cheerleaders kneeling during the national anthem at a game.

Photo: Blair Cheerleaders kneeling during the national anthem at a game.

No social issues have been addressed in such a way by Blair football players yet, but there is no hostility towards that type of expression on the team. Senior football player Spencer Helsing says that he has no issue with anyone bringing up social issues in sports. "It's their first amendment right," he says. That statement has been hotly debated the past few months by everyone on the national stage in the wake of Kaepernick's first protest. Some say that not standing is unpatriotic and disrespectful to those who serve in the armed forces. Many veterans rushed to the player's defense with a hashtag #VeteransForKaepernick. These men and women, not all of whom agree with Kaepernick, have said that they respect his right to free speech.

Other Blair football players have voiced a similar understanding for those who protest, but none feel that it is their duty to join it. Senior running back Eric Zokouri said the players "can stand up for whatever they believe in," and that he has no problems with athletes speaking out. But even if Blazers understand those who protest the anthem, most don't know whether they will join in the protest.

Senior wide receiver Cliff Carter wasn't sure if he would ever join the protest. Carter said, "I'm not sure. They're all entitled to their opinions, though." Whether or not any Blair athletes, football or otherwise, will take a knee for the anthem remains to be seen, but it's clear that many Blazers understand and support those who sit down for what's right.