Click here to view a video clip of the competition.

Six Blazers went to Arlington, Texas, to compete in the Junior Olympic Fencing Championships (JOFC) held from Feb. 18 to 21. Their placements ranged from eighteenth to 223rd for the nation in the events of épée and saber.

Seniors Max Czapanskiy and Erica Hartmann, junior Rachel Hunter, sophomores Adam Yalowitz and Sean Griffin, and freshman Ryan Waldman were allowed to compete in the championships by placing in the top three spots or top 30 percent of fencers at the Junior Olympic Qualifiers (JOQ), which were held in Washington, D.C. in November. All the Blazers are members of the D.C. Fencing Association (DCFA), whose coaches attended JOFC with the fencers. 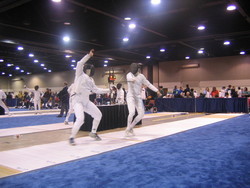 Photo: Senior Max Czapanskiy, right, in the 128th round of the Junior Olympic Fencing Championships. Czapanskiy placed 18th overall in the national competition, which was held from Feb. 18 to 21 in Arlington, Texas.

Photo: Senior Max Czapanskiy, right, in the 128th round of the Junior Olympic Fencing Championships. Czapanskiy placed 18th overall in the national competition, which was held from Feb. 18 to 21 in Arlington, Texas.

Czapanskiy advanced farthest in the JOFC and placed 18th out of 212 fencers in the Junior Men's Épée event. The junior events were for fencers ages 21 and younger and the cadet events were for fencers ages 17 and under. According to Czapanskiy, his downfall was his inability to adapt as quickly as necessary to increasingly hard competition. "I didn't up the fencing enough," said Czapanskiy. "I kept fencing as if I was fencing a worse fencer, so I lost in the round of 32 instead of going to the round of 8, so I was very disappointed." Czapanskiy, along with all the other épée fencers, also needed to adjust to recent rule changes in which the point of the épée must be thrust for a fraction of a second longer into the opponent in order for the attack to count.

Hartmann won a placement of 69 out of 118 for Junior Women's Saber. After winning three out of six bouts in her pool, Hartmann lost 14-15 in her first elimination round.

This was the first national fencing competition in which Yalowitz, Griffin, Hunter and Waldman participated. Competing in Cadet Men's Épée, Yalowitz won one and lost five in the pools and placed 200 out of 223 overall. Because of airport mishap, he did not obtain his equipment until 3 a.m. the morning of his event and was forced to rush to get his name stenciled, as required, into it.

Griffin also entered the Cadet Men's Épée event. After advancing past the pools, he lost to a fencer he had faced earlier in the pools by the same margin of a few points by which Griffin had earlier beaten him. Griffin was never the less satisfied with the results. "My crowning achievement was when the fencing instructor who runs DCFA, who has never talked to me before, came up to me and started talking about how I had great potential and how he wanted to teach me stuff," said Griffin, who has been fencing for DCFA for three years.

Hunter competed in Cadet Women's Épée. Only three fencers entered the JOQ for her event, and Hunter advanced automatically to the JOFC. Although she lost all six pool matches in the JOFC, because she kept the points close, she received a placement of 131 out of 140 overall. She started fencing in eighth grade.

Waldman tied for last place in Cadet Men's Épée. He started fencing last summer and decided after the JOFC to participate in more local competitions before pursuing any more national titles.

Czapanskiy received 207 points towards his 2004-2005 Rolling Point Standings (RPS), a ranking given to the top 64 fencers in the nation for each event. Czapanskiy is now number 21 in RPS. Over his six-year fencing career starting when he was 11, Czapanskiy has competed in four National Fencing Championships, four JOFC's, three Junior World Cups and at least 10 North American Cups.

The next event many of the Blazers have begun preparing for is the Summer National Championships held by the United States Fencing Association.