The Maryland State Highway Administration's (SHA) District 3 Office, which oversees Montgomery County, has finalized plans to improve six intersections along US - 29 between Wayne Ave. and East-West Hwy. The intersections will receive accessible pedestrian signals with countdowns, new and repainted signal equipment, ramps to comply with the standards of the Americans with Disabilities Act and repaired medians, according to Assistant District Engineer for Traffic Anyesha Mookherjee.

SHA planned the improvement project before receiving funding for it last year. Mookherjee explained that project plans are devised regardless of whether there is money available and executed as soon as funding comes along. The American Recovery and Re-Investment Act of 2009 ultimately provided $900,000 needed for the improvements, according to Mookherjee. 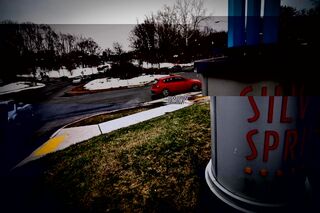 Photo: The 16th Street circle is of a particular concern to residents because of its complex organization and unclear markings.

Photo: The 16th Street circle is of a particular concern to residents because of its complex organization and unclear markings.

The District 3 Office decided to erect new signal equipment and reconstruct pedestrian crossways after realizing the deterioration that had taken place over time. "The intersections were really old," Mookherjee said. "The signal poles were in the median and they were getting hit." The District recognized the need for improvement of US - 29's junction with MD - 410/Burlington Ave., Sligo Ave., Silver Spring Ave., Thayer Ave., Bonifant Street and Wayne Ave. "We looked at those locations and said, 'we can bundle those together,'" Mookherjee said.

The project has been temporarily stalled due to conflicting pavement reconstruction along US - 29 administered by the Montgomery County Department of Housing and Community Affairs (DHCA). Intersection improvements may be pushed back a couple of months as a result of the District 3 Office's efforts to coordinate with the DHCA, according to Mookherjee. "We didn't want to put out signal equipment and then have them tearing it down," she said.

In late January, the Silver Spring Citizens Advisory Board met with residents to provide them with an overview of the intersection projects. Citizens discussed their concerns about pedestrian safety and the confusing 16th Street circle intersection, a separate project from the six Silver Spring intersections marked for improvement. "That was the driving force behind this meeting," Mookherjee said. Plans for the 16th St. circle, finalized in late 2008, include new crosswalks across Colesville Road, new signals and clearer vehicle markings. Construction will not begin until this spring, however, because administering markings requires pavement temperatures of about 50 degrees, according to Mookherjee.

Because the 16th Street circle project is not funded by the stimulus and the intersection is located half in Maryland and half in Washington, D.C., the District 3 Office has yet to resolve issues of funding and equipment design. "We're trying to figure out who shares the cost," Mookherjee said. "The signal equipment is very different between D.C. and Maryland. [The question is] after whose standards are we going to design it."

Mookherjee estimated the Maryland side of the 16th Street project may involve up to three years of construction. Improvements on the six intersections along US - 29 have a projected completion date of early 2012. "These types of projects are usually in the works for some time," Mookherjee said.