Skating on the edge

Speed skating, the sport that offers the fastest means of human travel without the aid of mechanics or gravity, requires only a moderate amount of balance and coordination. However, it takes a lot of hard work and determination to become the world's fastest speed skater - exactly what senior Camila Silva is currently striving to be.

She pictures the not-too-distant future and sees an arena packed with her fans wearing red, white and blue, the national colors representing both the U.S. and Chile. "My goal is to go to the Olympics," Silva says hopefully.

Silva moved to the United States from Chile less than seven years ago. The term ice skating meant nothing to her then, not only because she didn't speak English but also because the sport isn't popular in her homeland.

Before she began ice skating, Silva was one of the nation's top in-line skaters. However, because Silva has more room to grow and develop in speed skating, she dropped in-line to solely train on ice. In-line roller skating, along with cycling and running, are known to be valuable cross training tools for speed skaters. Silva's in-line coach introduced her to ice skating after he recognized her immense talent. Since then, she's been on her way to reaching the highest level of speed skating competition. 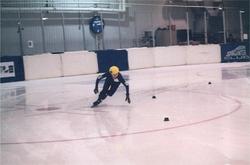 Photo: Camila Silva skating in one of her first races in Saratoga, New York.
Photo courtesy of Camila Silva.

Photo: Camila Silva skating in one of her first races in Saratoga, New York.
Photo courtesy of Camila Silva.

After speed skating became a Winter Olympic event in 1924 for men and in 1960 for women, more medals have been won by the United States in the sport than in all other Winter Olympic sports combined.

In just her second race on ice, Silva ranked tenth out of 16 at the 2005 Junior World Team Trials in Bay City, Michigan, where she skated among women who participated in past Olympics. In her third and most recent competition, the Rochester Invitational, Silva placed third out of six overall in four events.

Getting to the Olympic level demands immense strength, both physically and mentally. Silva spends a great deal of time refining and perfecting her skills. She skates for three hours five times a week with the Chesapeake Speedskating Association and conditions on her own during the remaining two days. With any free time she has, Silva walks on the tread mill, and during the summer, she cycles.

Throughout her intensive skating career, Silva's coach, David Kennedy, has supported and believed in her. "She has serious talent. She could make the national team," he says. "There's no question about it, but that just means, for the next two years she's going to have to work awfully hard."

Silva is a very busy person. "Most of the time I don't have enough time to do other things," Silva says with a sigh, yet her list of extracurricular activities proves otherwise. She was a soccer player just a year ago, and she has danced with the Cambodian Club at the Kennedy Center. Silva has been part of a tutoring program for almost three years, and on Sundays and Saturdays, she works at Togs for Tots. The same drive that helps her succeed in sports is apparent in other areas of her life. "Skating keeps me going," Silva smiles. 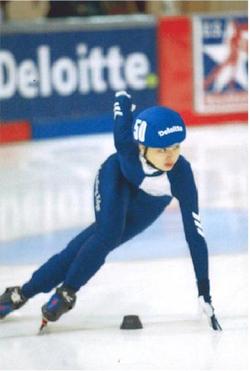 Her hectic schedule seems completely overwhelming, but as a serious athlete, Silva has grown accustom to her hectic schedule. "She gets very, very tired, but she's been disciplined since she was seven years old," her mother, Ana Gonzalez, reveals. "She has a strong work ethic, and she still keeps up with her studies." Silva finished the ESOL program in less than two years after her move.

Silva has had a few slippery setbacks, but nothing can keep her off the ice. "Camila has had many obstacles in the sport, yet she continues to be so strong," Gonzalez says, referring to Silva's recovery from two major injuries to her knee. One occurred two years ago when Silva was pushed and fell at an outdoor roller rink. The more recent accident occurred on ice after she lost her balance during practice. The second injury kept Silva from going to nationals and kept her from ice skating altogether for eight months.

Since the beginning of her skating career, Silva has had many positive role models. "My role model is my coach from Chile. He is an in-line, not an ice skater," she says, "but he taught me about discipline, hard work, being strong and never giving up."

Gonzalez is proud of her daughter, and their entire family is supportive of Silva's goals. With an adoring younger sister and brother, Silva has inspired her siblings to start ice skating as well. "My greatest motivation to skate is knowing that I can do something good for me and my family," Silva explains.

Though initially Silva had problems learning to skate the curves of the rink, she has made much progress. "Two years ago her technique was nothing, her speed was nothing. She's improved so quickly," Gonzalez says with a smile.

The track ahead is still long and icy, but Silva is determined to go on. She plans to go to college and to continue to skate. She says, "I still believe that I have a lot to learn and technique to work on, but I believe that if I work hard I'll be able to do it."

Tiffany Yee. <i>tic toc</i> Tiffany is... WAITING FOR SOMEONE TO WRITE HER BIO. More »