Skinned by the 'Skins

The Burgundy and Gold won their preseason opener against the Pittsburgh Steelers last Friday night, 16-7, giving their fans a tiny beacon of hope for the upcoming season. Coming off of a mediocre 6-10 season and dealing with many uncertainties regarding the starting roster, especially in the offensive line, the Redskins were the obvious underdogs. But the positive outcome got DMV fans back into the football spirit and ready to see some more action. However, even after the win, fans must realize that the team will still have a tough road to the playoffs. 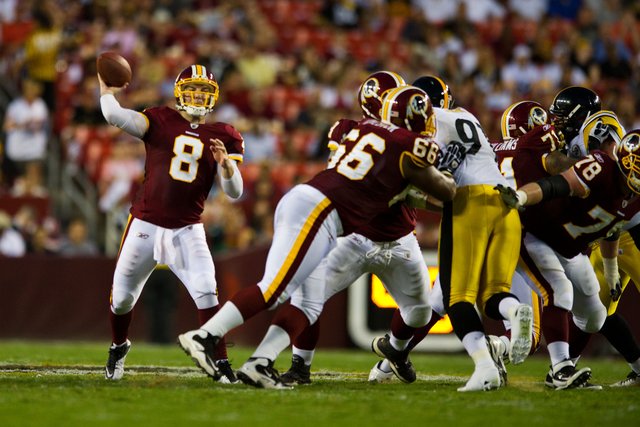 In recent seasons, fans have complained about the 'Skins' aging O-Line, poor defense and lackluster performances by Washington's starting quarterbacks. The NFL drafts came and went, but there haven't been many outstanding picks to show for besides Brian Orakpo. The free agency hasn't helped the team much either. Anyone remember the 'Skins ditching the inconsistent Jason Campbell for the slumping Donovan McNabb? And who could forget the Albert Haynesworth fiasco? He was certainly worth the $100 million dollars… right?

But that is all in the past. From the look of Friday's game, the 'Skins are shaping up. The team is looking for a new starting QB—which is now a toss-up between John Beck, who has played a whopping four games, and Rex Grossman, who tends to do something stupid whenever he steps on the field. After Beck suffered an injury during practice earlier in the week, head coach Mike Shanahan didn't let him play against the Steelers. Shanahan's decision gave Grossman the opportunity to prove himself and he actually had a good game, throwing 19-26 for 207 yards, impressive for a guy who turned the ball over against the Detroit Lions.

But he didn't accomplish this on his own, it turns out the offensive line got better. On a team where wide receiver Santana Moss seems like the only viable option, it's almost surprising that there are a few new faces on the squad this season who could do some damage: Jabar Gaffney received five passes and running back Tim Hightower had ten carries for 44 yards during the game. Other evidence of improvement along the O-Line? A nice 88-yard drive in the first quarter after being pushed to the one yard line, and Grossman didn't get sacked, for once. 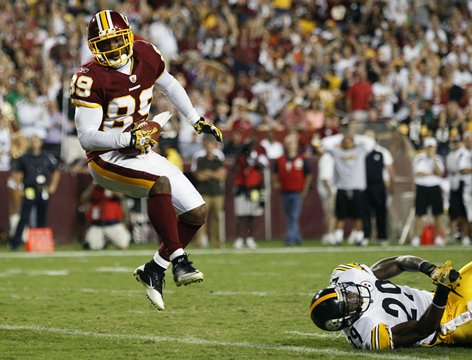 Photo: Santana Moss scored a touchdown for the Skins in the 2nd Quarter

Photo: Santana Moss scored a touchdown for the Skins in the 2nd Quarter Photo courtesy of redskins.com.

Despite the major strides, the 'Skins still have a lot to prove. Preseason games are worth little to nothing; Friday's game shouldn't be an indicator that the Redskins will sweep through their games with ease and win the Lombardi Trophy. In fact, the game won't even help much in predicting how well they'll fare against the Steelers in the regular season, as the Steelers replaced their starters halfway through the first quarter. The only definite conclusion I could draw was that kicker Shayne Graham will be out of a job after he embarrassed himself by botching those two short field goals. So much for being the third-most accurate kicker in NFL history.

Nevertheless, when the preseason continues into the regular season, we'll be able to see whether the team can continue to improve. But for now, I wouldn't put my money on the 'Skins for the Super Bowl. Instead, I'll remain optimistic of their chances at a winning record this season or, at the very least, not finishing last in the NFC East, again.