Three minutes. No props. Original poetry only. The rules are clear for Blair's second annual Poetry Slam, which took place in the media center tonight as part of the Blair Fair festivities.

For Junior Jacob Weisman, they're simple enough. He's memorized his poems and sits tonight on the edge of his seat in anticipation for his turn on stage. But overcoming nervousness and a big crowd isn't his only hurdle; he's got Asperger's Syndrome, a pervasive developmental disorder characterized by problems with social and communication skills.

But Weisman's second place award – out of 20 competitors – may have proven that communication issues ain't no thang for this aspiring rapper. "I have managed to overcome my Asperger's," he says. "Each of my poems has a different meaning, message, or portrayal of who I am. This is one way that I express my emotions." 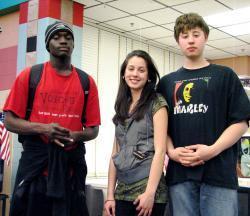 While Weisman's rap earned him the number two spot tonight, sophomore Jessica Diaz-Hurtado takes home blue with her fast-paced slam poem which entwines three stories addressing the struggles of dark-skinned Latinos. A Latino herself – half Colombian, half Salvadorian – Diaz-Hurtato says her poem holds special meaning in her life. "It's important that [this suffering] ends," she says.

With tight time restraints, Weisman chooses two original raps – "Taking it Back" and "Do You Know" – to pack into his allotted three minutes. He lets the words fly by with enunciation and confidence and earns loudest ovation of the night and plenty of fan attention (four sound recorders and a request for a repeat of his pieces, to be precise) after the show.

Media center specialist Lisa Hack, who helped coordinate the event, says that Jacob's "wonderful rhythm and stage presence" is just part of the quantum leap in talent at this year's slam. "I think the kids who came were really poets," she says. "The poems were more thoughtful, more intense."

Perhaps these are the qualities that earned Junior Rex Jarrett – whose autobiographical rap details a dark life shielded by an "emotional bullet-proof vest" – his third place title.

The presentations are not limited to slam poetry and rap verses. Junior Sara Cohen's ode to a boy's white sneakers – the "perfect canvass" for a myriad of colors that bring us back to elementary school valentine coloring, and Senior Braulio Salas's microscopic look at words also receive much attention from the crowd. Junior Ben Simon, too, kicks off the slam with an anti-ode to "flakers," a noun, he explains, referring to a person full of empty promises.

Hack says she likes the Poetry Slam for the unexpected talent it brings around each year. "There's this group of poetry-writing kids that no one knows about," she says. "The slam shows a different side." Weisman says it gives people passion to relate to and to appreciate. "I love doing this," he says. "I thrive on this. I rely on this to live."