Legalized gambling is the wrong place to turn for education funding

On Nov. 4, voters nationwide will gather at the polls to elect the next President of the United States. Whomever the voters choose will have a massive economic crisis to settle. Banks and mortgage companies are failing left and right, sending real estate prices tumbling. Revenue generated by property taxes has decreased as well, leaving public schools, which derive their financial support from property taxes, in a fiscal quandary. Maryland as a whole is suffering from this crisis as well, as the State Legislature's fiscal advisers are predicting an over-$1 billion budget shortfall for the coming fiscal year. 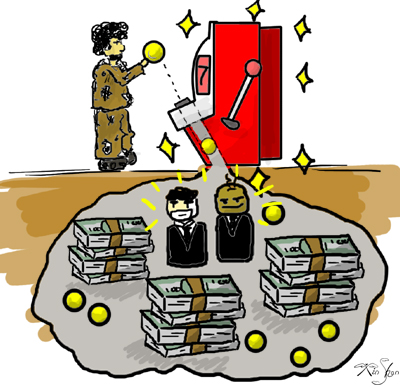 On election day, the citizens of Maryland will be able to vote on their legislature's attempt to solve this problem. "Statewide Ballot Question 2" aims to fund education by installing up to 15,000 slot machines in Anne Arundel, Cecil, Worcester and Allegany Counties as well as the city of Baltimore. Analysts predict that income generated as a result of the measure could eventually tally up to an estimated $919 million. In recent weeks, the proposal has gained endorsements from prominent state institutions such as the Maryland Chamber of Commerce as well as local figures such as Montgomery County Executive Ike Leggett. Sadly, these proponents are forgetting the Pandora's Box of social ills and corporate profiteering that the referendum opens.

The plan seems like a perfect way for the state to generate much-needed revenue - school systems get their money without highly unpopular tax hikes. Proponents of the measure, however, conceal the hefty sum of money that Maryland's struggling horse-racing industry stands to gain. A 2007 analysis by the Maryland General Assembly estimates that the policy will pump $129 million annually into horse-racing purses and "racetrack renewal" by the fiscal year 2013, while another $326 million would be diverted to slot machine operators. It's such a great deal for the industry that Magna Entertainment, which owns several Maryland-based horse-racing tracks, recently donated $2 million to pro-slots causes. The policy's intent to fund education is honorable, but the government should not lend public support to policies that so blatantly fatten private bank accounts.

Even if industry takes a large portion of the funds generated by slots, some would argue that the remaining money, $660 million according to state analysts, is more than enough to quench public education's thirst for funding. While it's true that the economic crisis has left state school systems in a precarious financial position, each citizen has the responsibility to help solve these problems. A disproportionate amount of slot machine profit, on the other hand, will be taken from the pockets of gambling addicts and the impoverished. According to a 2008 article from the Canadian Medical Association Journal, 60 percent of gaming machine revenue comes from problem gamblers. A majority of these problem gamblers - 60 percent nationwide, according to a study by the National Institute of Mental Health - earn less than $25,000 per year.

This proposal is simply not worth the negative social consequences of slot machines that will surely arise from the resulting gambling addictions. Dire financial penalties such as personal bankruptcy and consumer debt await addicts at rock-bottom. Additionally, a 1996 report from then-Maryland Attorney General J. Joseph Curran, Jr., found that domestic violence and child abuse rates often increase once gambling is introduced to an area. In state after state, expansions in legal gambling programs have also led to drastic increases in the number of these problem gamblers. California passed Proposition 1A in 2000, allowing "Class III" casino games such as blackjack, banked card tables and, of course, slot machines into the state's Indian casinos. Soon, the number of gambling addicts ballooned to 300,000, roughly a 30 percent increase. Slot machines generate 80 percent of casino revenue, so there's little question as to where those gambling addicts were spending their money.

The public education system and Maryland as a whole suffer from dire budgetary woes. That's still no reason for the government to allow business interests to cheat the poor out of their hard-earned money or for citizens to tolerate the social mess that will result from expanded legal gambling. Repealing some of the sweeping tax cuts passed by the state in 1997, for example, will easily make another $600 million available to balance the budget. Maryland needs politicians that are willing to bite the bullet and propose these tax increases, which, while unpopular, will alleviate the government's budget concerns. Slots may seem simple, popular and lucrative, but the long-term costs are too high for our society to shoulder.