The Blazers (0-4) entered Whitman's stadium as the Vikings' homecoming guests. Blair displayed some moments of magic but was unable to link any of them together, as their inexperience allowed for crucial mistakes. "We're a young team," assistant coach Bryan Nance said. "When we play seasoned teams like Whitman, our [inexperience] shows." 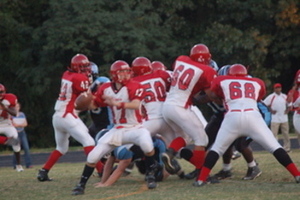 Photo: Sophomore quarterback Alex Egber looks to throw in the first quarter of a 30-0 loss to Whitman.

Photo: Sophomore quarterback Alex Egber looks to throw in the first quarter of a 30-0 loss to Whitman.

Although the Blair offense struggled to establish any type of rhythm throughout the entire game, the Blazer defense came out firing early on. Whitman received the opening kickoff but had little room to manage, punting and turning it over on downs on their first two possessions.

But sophomore quarterback Alex Egber and the Blazer offense were unable to capitalize. Egber completed more passes on Friday than in previous games, but the receptions were often for minimal yardage. On top of that, Blair's usually effective ground game, channeled through junior running backs Jonathan Haughton and Keith Ayensu, was unable to move the chains against a strong Viking defensive front.

The game, still scoreless, finally flashed some offense with four minutes in the first quarter remaining, as a Viking running back broke through the defensive line for a 20-yard run deep into Blair territory. The outburst hurt the Blazers' concentration, and Whitman was able to pound the ball into the end zone.

Down 7-0, the Blazers took over the ball at their own 18-yard line. A quick Egber completion to the left sideline brought Blair close to a first down, but they were unable to recover after a fumbled pitch sent them back 15 yards. Still late in the first quarter, the Blair defense jogged back under the lights. Despite the short field Whitman faced, the Blazers regrouped and again denied the Vikings a first down, and the Blair offensive unit took control of the ball to start the second quarter.

Deep in their own territory, the Blazers fumbled on the first play of the drive. Both teams pursued the ball as it bounced into the end zone. Blair hands touched the ball first, preventing a defensive touchdown, but ceding a safety. The lead grew to 9-0, and Whitman was given possession.

Blair's inability to hold on the ball plagued the team throughout the game, as they repeatedly dropped throws within reach, both on offense and defense, and bobbled kick returns in addition to the fumbles.

The Vikings, who struggled all night passing the ball through the air, soon found success running against the fatigued Blair defense. This ground game ate up the clock, but Whitman's inability to convert fourth downs kept Blair in the game and the score unchanged.

With just under a minute in the first half, Whitman threatened on a piercing run into Blair's red zone. The Vikings kept to the ground and pounded a touchdown in with 39.1 seconds left.

Egber stayed aggressive in the final moments of the half, launching a deep throw towards the right sideline instead of taking a knee. The gutsy decision did not pay off though, as the pass found the hands of Viking instead of a Blazer, and the stunned Blair offense was unable to prevent a 60-yard return for a touchdown. 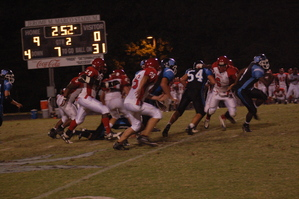 Photo: The Blazers defend against Whitman's ground game late in the first half.

Photo: The Blazers defend against Whitman's ground game late in the first half.

The 14 points the Blazers surrendered in the last minute of the half increased the Whitman advantage to 23-0, a misleading deficit in the eyes of many Blazers. "The score really didn't reflect how well the defense played," Egber said.

The second half was no different for the fraught Blair offense, as they crossed midfield only twice and never penetrated the Viking red zone. The Blazer defense continued to fight though, allowing Whitman entry to the end zone only once in the second half, for a final score of 30-0.

Blair showed more potential than the scoreboard indicated. Had it not been for the chaotic last minute of the second quarter, the Blair deficit would only have been 16-0, surmountable with only two possessions. "We beat ourselves," Egber explained, referring to the critical mistakes the team made.

But the bright spots – like the intensity and speed of the defense, and the moments of offensive chemistry – keep the team positive and hopeful for the rest of the season. "We're still learning," Nance said. "We're going to get better."