In Barcelona, they call it "Bicing." In Paris, it's "Vélib." The wave of public bicycle sharing programs that has swept through Europe has finally arrived in the U.S., with a successful system implemented in Washington, D.C. as of August. Now, Montgomery County Councilwoman Valerie Ervin is proposing a similar pilot program for Montgomery County. The program is vital to the citizens in their efforts to conserve the environment, save money and reduce traffic.

Ervin's plan is modeled similar to the bicycle sharing program in Washington, D.C., named Smartbike DC, and the program has worked well. It provides 120 bicycles based at 10 stations throughout downtown Washington. Users borrow bicycles from the designated stations, ride them for up to three hours and return them to any other station. According to Jim Sebastian, the District Department of Transportation Bicycle Program Coordinator, the program has 900 subscribers and logs 150 daily trips on average. 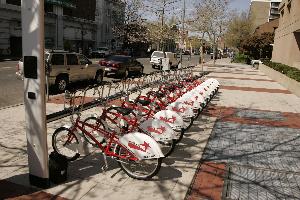 Montgomery County, like the rest of the country, is going through tough economic times. The proposed program, however, would cost nothing to taxpayers. Smartbike DC is provided through Clear Channel Outdoor, the contractor for D.C. public transportation's advertisements. Clear Channel Outdoor or a similar advertiser will provide Montgomery County with its bikes. The company that provides the bikes would pay for the entire system and wouldn't charge the county anything, using the bicycles as a medium for their advertisement, according to Ervin. Rather than spending more money on additional public transportation, this bicycle program would cost nothing and will transport Montgomery County citizens from place to place for years.

Bicycle sharing can bypass arduous public transportation or stiflingly expensive gas. Bus routes will never have the capability to cover the same area as thoroughly as a rented bicycle could. Also, a subscription to the bicycle-sharing program is less expensive than taking public transportation every day. If one were to take the bus every day to work, they would spend approximately $1,200 annually, according to the Washington Metro Area Transport Authority, whereas a subscription to the similar D.C. program is only $40.

Montgomery County's pilot program would call for 10-15 bicycles available for short-term rental, stationed at eight stations throughout the down county. Ervin hopes to establish the program by October 2009 and expand from there. "We're hoping we can get the pilot program up by then so that we can show people that biking is a better option for getting to work or even for recreation," Ervin said.

Anyone who has had to battle through rush hour traffic in Montgomery County can appreciate how the plan can alleviate the congestion. Even if there are only 500 bikes, less people driving means less traffic.

Montgomery County needs to go green. These bicycles will encourage less people to drive and will cut down on the amount of pollution coming from the county. Ervin stressed that reducing the county's "carbon footprint" is the main goal for this program. Ervin says that if the program were passed, the county would be forced to improve the quality of recreational bicycle trails countywide.

The county has no better way to transport more people while inflicting less traffic. At no cost to the taxpayers, this program has no disadvantages, other than that sitting on bicycle seats for extended periods of time can cause discomfort. County citizens should support Councilmember Ervin in her efforts to integrate bicycle sharing.