Dahlia Huh, a junior at Clarksburg High School, and Calvin Yeh, a junior at Poolesville High School, were nominated on Feb 27 at the nominating convention as the final two candidates for the Montgomery County Student Member of the Board (SMOB), narrowing down the competition from the three candidates who applied in January. A few hundred delegates from middle and high schools across the county, including several from Blair, attended an all-day forum where the candidates shared their ideas before the delegates. The delegates then voted in the final two candidates. With SMOB elections on Apr 30, it's time to start getting to know the candidates.

Huh first become interested in student government in middle school. "My passion for student advocacy began when I joined the SGA at [Roberto Clemente] Middle School. After seeing my first SMOB election in seventh grade, I decided I wanted to be SMOB during my senior year," she said. She continued exploring her passion in the Montgomery County Regional Student Government Association (MCR) and was part of the SMOB Advisory Council, which helps the SMOB with their responsibilities including communicating with students and making decisions.

She first started her campaign in June last year when she started gathering her campaign team from schools all around the county. She started planning and mapping out her campaign during the summer and started writing out her platform in the fall and winter. She finally filled out the forms to apply to be a candidate in January. "I am very fortunate and grateful that I was selected to be SMOB candidate," she said.

Huh has three main priorities if she is elected SMOB. First, she wants to increase communication between the SMOB and students through things like the morning announcements and school newspapers.

The second thing she would like to do is to create a database or a website that will help support students in whatever they hope to achieve in Montgomery County. She feels that since there are so many competitions, scholarships, Student Service Learning (SSL) hours, tutoring, internship and job opportunities that students don't know about, it would be extremely beneficial for students to access them in one central location. "One of the reasons it is a key priority for me next year is because it is something very tangible. It's something that students and the SMOB can do without needing much adult help," she said.

Her third priority is to get full SMOB voting rights, which will allow the SMOB to vote on the budget, school closings and boundary decisions. "Never before has the environment been so favorable to get SMOB voting rights," she said. Former SMOB Alan Xie nearly managed to get the bill passed three years ago, but it did not pass in the Senate. Besides her main priorities, Huh also wants to focus on issues like overpopulation in schools.

Huh is not only involved in student government; she is also a varsity tennis player who enjoys working on service projects. She often volunteers at Manna Food Center, the main food bank in Montgomery County. She also published a 350-page children's literature book this past summer with her sister, Sunmee, called Gilbert and the Scepter of Silence, which is available on Amazon. She is also the cofounder of Good50.com, a search engine with a preset big font size that is meant for people who are visually impaired. The Washington Post and American Association for Retired Persons (AARP) have both picked it up. She and her sister founded the website three years ago and since then, 1.3 million searches have been conducted on it. They've donated a lot of the profits to charity, mainly to earthquake victims and to the Salvation Army. 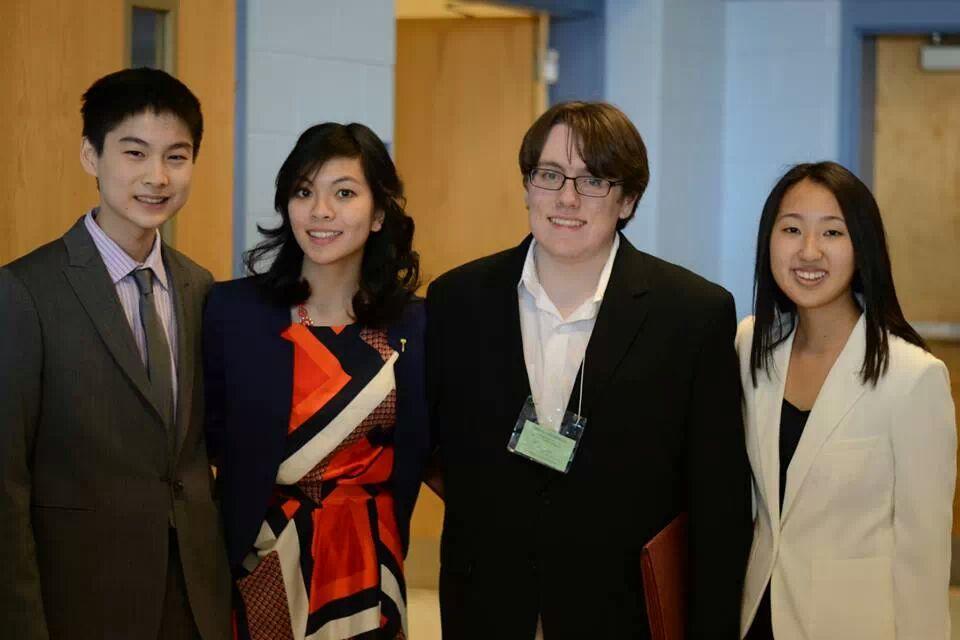 Huh believes that the thing that makes her campaign unique from others is that it is very heavily focused on social media and making sure that everyone in the county knows about the SMOB elections. "I want someone involved in the SMOB election in all the schools, so students don't feel ambushed about the election," she said. Her Facebook page has reached over 60,000 people and she is trying to visit all the high schools and middle schools in the county. She is planning to visit Blair sometime before the elections take place.

Huh has a big vision for Montgomery County Public Schools, which she has been in since kindergarten. "We are one of the highest ranked school districts in the country but not the best. I want Montgomery County to be the best," she said.

Yeh also first became involved in countywide student politics in middle school. "When I was in seventh grade, I got involved with the SMOB candidate Alan Xie's campaign," he said. After Xie won the election, Yeh became a part of the SMOB advisory council in the lobbying department. "We made sure youth voices were being heard on issues," Yeh said. He went to Annapolis to testify for SMOB voting rights, which he considers an amazing experience. He also advocated against a financial literacy graduation requirement because it would be an unfunded mandate and restrictive on students.

Yeh thought about being SMOB early on in his academic career. "Even in seventh and eighth grade, it was on the back of my mind," he said. However it was not until after his friend, the current SMOB Justin Kim, for whom Yeh is Chief of Staff, was elected that Yeh decided to run. "I thought about where I can make the most difference for Montgomery County students. Next year's SMOB will serve in a year that is incredibly crucial. So many important issues are coming up like the bell times schedule. We need a strong, dedicated, passionate voice on the board," Yeh said.

Yeh has several issues he would like to prioritize if elected next year. "SMOB only has one year to make a difference," he said. One of the first things he'd like to do is individualize education. He thinks that Montgomery County should provide the necessary resources for students to pursue their interests and careers. In order to start individualizing education, he wants to start reducing class sizes by hiring more teachers. He also knows that there are severe overcrowding issues in Montgomery County with some elementary schools overcrowded by 150 percent.

Yeh is also a big proponent of integrating technology into education by bringing tablets into the classroom and having a Bring Your Own Device (BYOD) policy. Students would be allowed to bring their own tablet, laptop or smart phone and be able to access schools' Wi-Fi.

Yeh is in the Humanities magnet at Poolesville, which gives him an appreciation of Montgomery County's magnet programs and academies. He likes that students get to explore their interests at an earlier age through these programs.

At Poolesville, the SMOB candidate is involved in many extracurricular activities, including French National Honors Society and the Business and Investment Team. He thinks that the variety of extra-curricular activities available is what makes Montgomery County schools very special.

Yeh believes that his campaign is different from Huh's because he is focused on solutions. He wants to make sure that many of the promises he makes will come true. "I want to work with board members to find innovative solutions to things like the achievement gap, educational technology, extracurricular funding and school modernization," Yeh said.

In late April, Montgomery County students will watch the Meet the Candidates video filmed soon after the nominating convention. Yeh feels that it is one of the most important parts of the election. "It's unique because it is the one opportunity that we as candidates get to reach out to all the students of Montgomery County," Yeh said. On Apr. 30, students will then vote for SMOB candidates as well as student government and class officers.