Neo-Nazi triplets, "The Tremors," complete with leather pants, shocking tattoos, poorly shaved heads and Sharpee Hitler moustaches. A famous peddler of card tricks showman from Las Vegas. A back-country, ninja-riffic 12 year-old hyped up on Ritalin who talks like he's watched too many re-runs of "Da Ali G Show." While in reality, most of these people could hardly be found in the same hemisphere, director Joe Carnahan manages to successfully squeeze them into an amazing two hour ride into the realm of incredible action, wild characters and spent shell casings, "Smokin' Aces."

"Smokin' Aces" does not have the most original action plot. The film follows Buddy "Aces" Isreal (Jeremy Piven) as he decides to testify to the FBI about the Las Vegas mob. And, you guessed it, mob head honcho Primo Sparazza (Joseph Ruskin), orders him killed, with a $1 million dollar payoff to whoever gets him first. It is the job of FBI agents John Carruthers (Ray Liota) and Richard Messner (Ryan Reynolds) to protect Aces, who is hiding in the penthouse of a high-rise hotel. Just as the agents arrive, so do, inevitably, all the psychotic, gun slinging maniacs looking to collect on the bounty. Chaos, in the form of extreme amounts of violent gunfights and other barbaric acts of aggression, ensues as would-be assassins cross paths and exchange bullets. 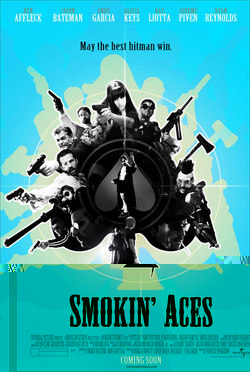 Carnahan takes an already successful formula for good action films (giving unhinged people guns), and pushes it to the limit, increasing the amount of lunatics to a good dozen or so and upping the gun-power, starting out with simple handguns and escalating to hyper-velocity sniper rifles and chainsaws. The movie lacks nothing in the way of pace, infusing action and humor. Drawing from the 1990s Guy Ritchie film "Snatch," the many characters are introduced separately, with small flashbacks showing them at their most memorable moments. Scenes of violence or aggression are often offset with humor, which though often quite inappropriate, are still effective in relieving tension and making the viewer laugh.

"Smokin' Aces" is at the heart, an action, but perhaps more importantly, a character-driven film. The aspect that makes the film most memorable are the gun toting crazies
along with the faced-paced aggressive plot. By introducing such memorable characters such as The Tremors, the duo of sniper rifle-shooting female assassins and mixing them, with equal parts of crude humor and smoking gun barrels, Carnahan creates very memorable scenes.

"Smokin' Aces" occasionally does misfire. Halfway through the film, the plot gets muddled and bogged down by extra baggage that an action film can do without, like a strange love story, a debate on the nature of loyalty and some of the characters striving for higher ideals. Though distracting, these end up being just minor annoyances to the viewer as the action picks up without missing a beat and most of the characters that cause these issues are repeatedly shot.

Camera work is extremely well done. Carnahan experiments with getting extremely close to his characters, often zooming right into their eyes from an original distance of an apartment building away. Cuts between scenes of someone's impending doom and ones of a more docile nature succeed in heightening the ever-present tension in the film. An energetic rock and more techno soundtrack is effectively overlayed onto the film, signaling a change in pace or an upcoming shootout.

Carahan's film-making style and cast keep "Smokin' Aces" true to its roots, with tremendous action scenes, crudities about and amusing humor. Undoubtedly worth viewing, "Smokin's Aces" is a good pick for anyone with free time and a strong constitution.

Smokin' Aces is rated R for strong bloody violence, pervasive language, some nudity and drug use