As usual, the predictions were wrong. Somehow, "a light dusting" turned into "1-2 inches," which turned into "2-4 inches," which turned into two and a half hours stuck in the world's largest parking lot, also known as I-270. When students arrived at school a few hours late (the Colesville bridge closing didn't help) only to find out that MCPS decided the conditions weren't bad enough to close schools, we decided that some real weather experts needed to be called in to make the shots.

So, back by popular demand, or maybe just with too much time on our hands, this year's Editors-in-Chief-turned-meteorologists are here to give you the dish on what to expect, with more accuracy, more funny...more snoWatch. 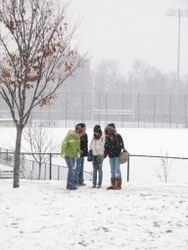 Photo: Despite the snowfall, school remained in session today. Students managed to make the most of the snow during 5a and 5b lunch.

Photo: Despite the snowfall, school remained in session today. Students managed to make the most of the snow during 5a and 5b lunch.

After this morning's horrendous snow-induced commute (think walking through a war zone, but worse), MCPS owes us a little something. And what better than two more glorious hours of sleep? Even if the sun somehow shines and melts away all the ice, snow and slush within the next ten hours, it's likely that MCPS will live up to its snow-pushover reputation and get us a delay, at least.

Luckily, weather.com calls for an inch more of snow tonight, which will probably ice up nicely in the freezing temperatures tomorrow morning. And even if the actual meteorologists are wrong (shocker!), there's always Damascus.

Sorry to dash any hopes of this year's first snow day, but with temperatures expected to break the freezing mark by noon tomorrow, a closure is a far-fetched possibility. Still the combination of MCPS's notoriety in the realm of school closings and the plethora of angry parents after today's botched call may get us out of school for the day. After all, AFG won't be able to find the mission statement if it's buried under a pile of snow.

Remember - you can make a difference! Through a theoretical survey of 100 Blazers, we at Silver Chips Online have not-so-scientifically proven that the snow dance does work. So forget Soulja Boy and trade that Superman in for a wholesome, effective nightwear reversal, and get ready to "shovel up that snow."

snoWatch Fact (because we really are weather experts): Today marked the fourth time in the last six years that snow fell in the area on Dec. 5, according to Channel Seven Chief Meteorologist Doug Hill. So underclassmen, remember the date for next year, and let's hope that with so much warning ahead of time, MCPS will finally get it right and give us the day off.