SnoWatch: Can we get an Even day?

Last week was a busy week. On Tuesday, we found out that the sky gods are democratic, as they heeded Obama's words from the State of the Union address and "did big things" (those of you out of the loop go to 1:01:16). Then, to our delight, some flurries and ice closed schools on Wednesday and later in the morning thick, heavy snow came down from the sky in blizzard-like waves. And around 6:30 p.m., Pepco had an epileptic seizure and died. 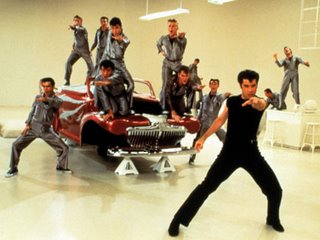 Photo: Tomorrow should be icy and slick enough to get us a two-hour delay, but not a cancellation. Think Grease Lightning, not Jersey Shore.

Photo: Tomorrow should be icy and slick enough to get us a two-hour delay, but not a cancellation. Think Grease Lightning, not Jersey Shore.  Photo courtesy of 80s-disco-music.blogspot.com.

Pepco's swift, tragic and completely foreseeable death on Wednesday left hundreds of thousands of Montgomery County residents without power, as well as a ton of MCPS facilities. Some lucky Blazers only lost power for hours, some unfortunately lost it for days and those who had light and heat were practically running hotels during the five-day weekend.

Our SCO offices - meaning, the Internet - were also temporarily down (and without warmth - we huddled in a corner and for the first time in our lives wished that we were a print newspaper so that we could have something to burn), and we are sorry that we couldn't deliver you any news or help you place bets on whether school would be in session on Thursday and Friday. Eventually, though, we emerged from our cave, trekked to Downtown Silver Spring, saw too many people we recognized and realized that we were so not eager to be seen in our frozen, pale, slightly feral-looking state (having no TV will do that to you). So back to the cave we went.

But poised on the eve of our first Even day of the semester, we're here, almost completely defrosted and ready to let Blazers know what's in store for tomorrow!

Predictions: where we make up fake numbers based off of real facts

Chance of a delayed opening: 79%
Chance of a cancellation:45%
Despite not getting power back until Friday, our Winter Break Part II was very relaxing due to its impeccable timing at the beginning of the semester; as a result we're vehemently petitioning Weast to make the one-day school week the new standard. But Blazers shouldn't expect another full day of rest and relaxation, as the only precipitation we're getting tonight will be, in exact measurements, waaaaaay less than an inch of ice. According to the Capital Weather Gang, though, it'll be enough to make the ground nice and slick! And MCPS knows that sneaky patches of ice are treacherous and, as we learned this morning, slipping up on your walk in to school is mortifyingly embarrassing but apparently hilarious to security guards.