SnoWatch: easier than studying for a midterm

Weather.com predicts a 100 percent chance of snow tonight. Why am I even here?

It appears as though we have a dilemma on our hands.

As a sneaky exam week (since when do we have midterms the week after we get back from break?) rears its misshapen, demented, soul-sucking head, many Blazers are torn about their desire for a snow day. Is one measly day off really worth cutting our precious review days in half?! Absolutely. And for those of you who are worried about not being able to brush up on your Shakespearean vocabulary or go over Reconstruction just one last time... why?

Never fear, everyone else who doesn't care about review days: the sky is on your side. And quite frankly, it's about time. We had that dusting on Christmas, a pathetic excuse for precipitation this past Saturday and a slue of grey and unbearably cold and windy days in-between, but no snow? Inexcusable. Yet until now, snow seemed about as concerned with unexcused absences as seniors under the new LC policy are. I mean the snow just didn't care about our poor, overworked souls, and we only have two days off and four exam days in all of January. It's horrible! 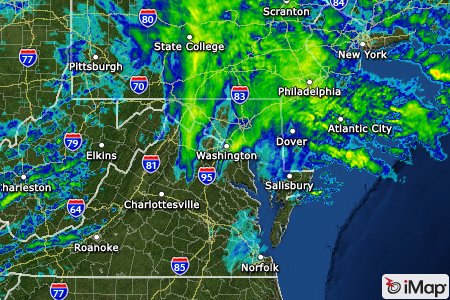 Photo: At second glance, this picture isn't hard to understand at all. Now we feel dumb.

Photo: At second glance, this picture isn't hard to understand at all. Now we feel dumb.  Photo courtesy of accuweather.com .

All of our unrelenting schoolwork aside, and as we put on our best meteorologist voices and pretend to understand the picture to your right, it's clear that we'll be getting some form of the fluffy white stuff tonight. But will it be enough to close schools tomorrow?

Predictions - where we make up fake numbers based on real facts

Chance of delayed opening: 95 percent
So we knew it was going to snow when we saw the plow trucks sitting on the side of the Beltway this morning. They weren't really doing anything, but they sure were ready to spring into action 12 hours later when the snow actually started falling! By now, a steady stream of sleet and big flakes of snow has created a definite layer on streets; we're expected to get only about one to two inches in total, though, according to ABC News. But at the rate this stuff is coming down (in Silver Spring, at least, we don't know about you farther-away Blazers), it looks more like two to three. Either way, the metropolitan area is only getting the edge of the storm that's responsible for blizzard-like conditions in New England. Even within the county, though, the further north one travels, the more snow there is. We are truly blessed to live in a school district that stretches all the way to places like Damascus.

Not to mention, this snow is kind of like the Honey Bunches of Oats of precipitation. There's a tasty cluster of ice in every otherwise fluffy bite! And in this county, I-C-E spells two-hours-late.

Chance of school cancellation: 58 percent
Despite the ice, this stuff really isn't supposed to cause major problems. Perhaps a traffic jam or two on the Beltway tomorrow morning, but this snow isn't the city-stopping type of storm that most Blazers are hoping for. Though most of the snow is supposed to accumulate between 7 p.m. and 10 p.m. according to the Capital Weather Gang, we suspect that Weast and his minions will be stricter than usual because of the fast-approaching exams.