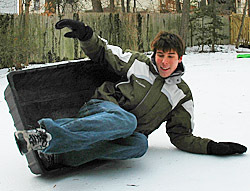 Photo: Yours truly falls out of something he was sliding in. Photo by Mike Lautenberger.

Photo: Yours truly falls out of something he was sliding in. Photo by Mike Lautenberger.

4:30 p.m. Thursday update: Montgomery County Public Schools will be closed on Friday, February 16, 2007, due to the continuing difficulty of removing ice and snow from school system facilities and public sidewalks. Well, our streak of perfect accuracy has finally ended with tomorrow's unexpected closure (who saw that coming, seriously?) You gotta admit though, snoWatch had this storm on lockdown from the beginning and we're in no position to stop gloating about it. Looks like we're getting that "lovely seven day weekend" after all, and despite what Jeff said earlier, he will be back (if it ever snows again) to write snoWatch. Until then, we're out!

4 p.m Wednesday update: All Montgomery County Public Schools will be closed tomorrow, Thursday, Feb. 15, due to emergency weather conditions. Now what would have been so hard about an afternoon announcement yesterday? Whatever, I'm not complaining. Once again, the forecast managed to be completely wrong but at least we got off this time. What happened to all that ice that was supposed to "paralyze" areas north and west of D.C. you ask? The 130,000 people in P.G. and Anne Arundel (south and east of the city) without power because of the ice sure want to know as well. As for Bob "lyin" Ryan's prediction of 45 degrees and rain, well, who knows what he was looking at. Enjoy your sledding again tomorrow in the 3-5 inches of surprise SNOW in MoCo.

5 p.m. Tuesday update: We're two for two so far, if you count our late-night flip-flop calling for school today as a success. We hope you all enjoyed your afternoon off, just as snoWatch predicted, and we can pretty safely advise you to plan on sleeping in tomorrow morning. We're striving to go three for three and could use the help, so don't forget your ice dance tonight.

The freezing rain is now falling throughout the snoWatch coverage area and according to our extensive network of snoWatch correspondents (Payal and I) it is already accumulating on roads from Rockville to Silver Spring. Wait, check that, the salt truck just went by. Three times. Four. Ugh. Anyway, our original prediction of no school tomorrow still stands.

Forecast update: The National Weather Service still forecasts (that's right, it hasn't changed in EIGHT HOURS!!!!) a 100% chance of freezing rain tonight and tomorrow morning, accumulating up to one half an inch, with more snow to finish the storm off. They warn of "severe icing of trees and roads" and the "potential for widespread power outages." Meanwhile, Bob "lyin" Ryan is insisting on rain tonight and a high of 45 tomorrow.

Scroll down to see our original report and predictions, first written Monday evening

So we all know this winter has been downright pathetic regarding snowfall in good ol' MoCo. Although snoWatch's brand-new, secret, state-of-the-art forecast center outside room 165 has recorded a pitiful .6328543 inches of snow this year – well enough to warrant our recent two-hour delay and closure last week, mind you – we're still feeling just a little bit slighted by the snow gods. Yes, we watched the forecasts change as we went from perfect ecstasy (approaching blizzard) to foolishly hopeful (we hate weathermen), but we're still hanging on for some well-deserved (read cheap) snow days.

It looks like the 140,000 kids in MCPS might have to wait a little longer for some real snow, but wintry weather is certainly on the way. So kids, remember to walk around your bed three times and say, "Heel toe, heel toe let it snow." If you can't physically walk around the bed, and we still have school tomorrow, we all know it's your fault.

It was just about 24 hours ago that certain forecasters predicted "blizzard" conditions and "12 inches of snow in Washington, D.C." Since then, those totals have plummeted and it appears we're facing a fierce icing rather than a snowy wonderland.

Jeff's 3 a.m. Tuesday update: So much for my all my confidence. With temperatures from Silver Spring to Damascus still holding steady at 35 degrees in the early morning and an eye-straining blank radar scan, I'm starting my HW. I've had enough of this writing business and it looks my career in meteorology is officially shot. Don't worry though, for the sake of restoring honor to snoWatch, I'll stick to taking photos next time.

Jeff: If the storm gets going Monday night as predicted, we can expect a couple inches of snow followed by an extended period of that menacing no-fun-to-play-in combination of freezing rain, sleet, and ice ending sometime on Wednesday. Unfortunately, we will not be blessed with the epic snows seen in Parish, NY, but as the Beltway morphs into a skating rink and PEPCO brings out the chainsaws, MCPS will be forced to close eventually even if the phrases "winter storm warning" and "significant freezing rain event" don't prompt one of those preemptive decisions we've come to count on.

Payal's (hopeless) update: Ummm, right. Snow would be good, but a school closing would be a blessing. If the county does not choose to close school at 5 a.m. be prepared for either an early closing or simply a fun, long, drawn out mess of cars and ice. All I care about is if I have to do my biology project tomorrow. The way things are looking, with officials that are less apt to close school now that we actually have accumulation, we may have to cling to the hope of an early dismissal or a closing if the snow decides to behave. I'm still doing the biology project, just in case.

24 hours ago…ACCUWEATHER.COM blogger Henry Margusity said: "It will snow. A lot. Everywhere. I repeat, everywhere." He went on to give a prediction of blizzard conditions from the Mid-Atlantic to Maine and snow totals of up to 18 inches beginning Monday and ending Wednesday. Margusity, a self-proclaimed "meteorological madman" initially predicted 12 inches in D.C. and a whopping 16 inches in Hagerstown. Thanks, Henry. Way to be right.
ACCUWEATHER.COM now says:There will be between 2-4 inches of snow, followed by 1.25 inches of ice beginning Monday and ending Wednesday. At least they spelled the days of the week correctly.

Since the .6328543 inches of snow thus far has resulted in 1.5 days off, expert snoWatch mathematicians quickly calculated that 5.25 inches of mixed precipitation will get us 12.44 days off from this "significant freezing rain event." Unfortunately, upon examining reality, we are forced to admit that that likely won't happen. Nevertheless, we could certainly have an abbreviated week coming up. Possibly Tuesday, probably Wednesday. But still, wouldn't it be lovely to have a seven-day weekend?

✓ Chance of closure Tuesday: What was 100% last night is now 30% and freefalling faster than a skydiver without a parachute. Although an inch or two of snow Monday night and the simple threat of ice on Tuesday should send Jerry Weast and Co. into their usual panic mode, assuming whatever precip that's supposed to get here does, Payal, with her complete lack of faith in her own convictions, will finish her project…once her partner finishes her snow dance and actually calls her.

✓ Chance of early dismissal Tuesday: 75%. MCPS's least played card, the early dismissal, could be the clincher today as long as it starts snowing/sleeting/freezing raining/wintry mixing early enough and the mercury drops below the magic number.

✓ Chance of closure Wednesday: 100%. If the icing continues for 24 hours or more as predicted, the mess will be too great to disappear overnight. Also, look out for isolated power outages.

✓ Chance of closure Thursday: >50%. Chance of two-hour delay Thursday: >75%. Two days should be enough for most roads to get cleared in any respectable county with a budget greater than the GDP of most countries, but this is MoCo, remember?

Jeff Lautenberger. Jeff is a senior finally runnin' the SC Photo Staff. He is easily irritated and has been known to curse loudly when complemented on his pictures. So just don't do it. Ever. When not hiding from his invisible friends in the Chips lab, Jeff can … More »