snoWatch: The quest for milk

Sounds to us like they're prepping for some serious school cancelling... 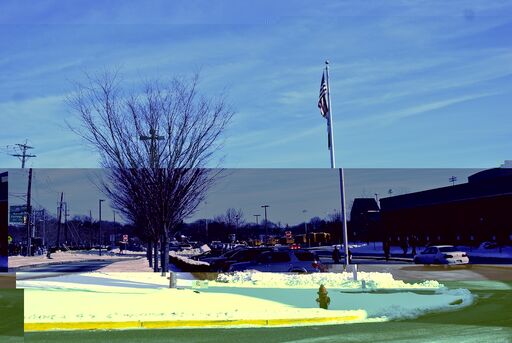 Photo: Once again, Blair's grounds are buried in snow.

The air is freezing cold, the wind is making my eyes water, the parking lot is full and the frigid atmosphere is suddenly pierced by a shriek of frustration. I have just walked out of my third grocery store of the day empty-handed, with no carton of milk in hand.

My mother sent me and my brother on the journey for milk - what we assumed to be a 10-minute trip - around 8 p.m. and we just returned a half-hour ago, which is the excuse for this later-than-usual posting.

The scenes at the grocery stores were madness. A fellow customer starting laughing uncontrollably when he saw the barren shelves of the dairy aisle. "This is worse than the Soviet Union," he chuckled. Bread racks were almost wiped clean. Vegetables - excluding artichoke hearts, brussel sprouts, okra and other gross, unnecessary veggies - were nearing extinction.

And what was the cause of this ridiculousness? Snow, of course! Despite my frozen fingers and the reality of having to drink soy milk (chocolate flavored - can you believe it?) tomorrow with my cereal, I am utterly giddy imagining the amount of snow that will be on the ground by Saturday evening.

Snow experts are forecasting one to two feet (that's right - feet) of snowfall beginning tomorrow at 10 a.m. and ending around 11 p.m. Saturday night. Never fear - you will have the company of seasoned snoWatch experts with periodic updates of snowfall amounts through the weekend.

And the Super Bowl this weekend should keep even the most restless Blazers occupied (if you're looking for chips and salsa, I happen to know that the Giant, Safeway and RiteAid in Rockville have them in stock).

If MCPS were smart, school would be cancelled already. Even if we're able to get to school safely in the morning, getting home, whether it's an early release or a full day, will be dangerous. That said, officials will refuse to let us out of school unless they actually see the flakes falling from the sky (seeing is believing - for Larry Bowers at least), so an early release is almost certain - I'd bet my second semester grades on it. Either way, we'll have the entire afternoon to ourselves for sledding, snowball fights, TV marathons and hot chocolate.

In other interesting snow-trivia, this storm could make history as the largest snowfall ever for our area. (Our dear friend Henry Margusity over at AccuWeather is calling the storm a "monster." Thanks, Henry). Below are the top 10 snowstorms on record for Washington, D.C. Where do you think this weekend's snowfall will fall on the list?

Editor's note: THERE IS GOING TO BE SO MUCH SNOW ON THE GROUND. If sheer ecstasy and jubilation have caused us to inflate or deflate our estimates for school, we apologize in advance.