Well, here we are again, already writing another snoWatch column for you to enjoy. We're fresh off a snowy weekend - though we were all secretly hoping for a two-hour delay yesterday - and the weather services are predicting snow tonight and early tomorrow morning. 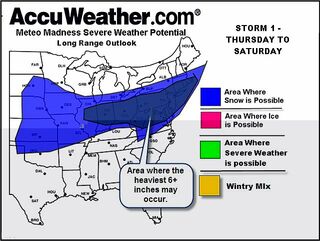 Photo: The answers lie in the blue area!

Photo: The answers lie in the blue area! Photo courtesy of AccuWeather.

If you were among those hoping for an early end to winter (the warm weather last week fooled us too!), the groundhog says you might have to wait a while, according to reputable social-networking sources. A few hours after the legendary groundhog, named Punxsutawney Phil, saw his shadow today and predicted six more weeks of winter, the rodent's first stab at text-messaging appeared. Phil also sent a Twitter update at about that time, according to the Associated Press. Attempts were made to contact Punxsutawney Groundhog Club but officials did not return calls about Phil's sudden acquisition of opposable thumbs.

The really accurate information doesn't come from rodents, of course, but from our allegedly trustworthy friends at NOAA. NOAA is predicting a 100 percent chance of 4-6 inches of snow accumulation tonight, mainly before 3 a.m., and a 20 percent chance of snow tomorrow morning. With only a few short hours to clear roads, the morning commute could be messy, especially in the suburbs (Poolesville!) where temperatures will be coldest. Delays and cancellations seem likely, though the sun will be out in the afternoon and temperatures will reach 40 degrees.

But if you want reassurance that snow is a-comin', look to AccuWeather blogger Henry Margusity, who is calling this storm a "big daddy." Sounds like solid evidence to us!

Chance of delayed opening: 93 percent
Look outside your windows, Blazers - it's already snowing. With a 100 percent chance of precipitation in the air, tonight will be a lovely scene of heavy flakes falling through the sky. And the temperature tonight - a broiling 27 degrees - virtually guarantees ice freezing on the streets, pedestrians falling on their rear ends and Blazers sleeping in.

Chance of closing: 67 percent
This is a tricky snow fall to follow. It's more than enough to delay school but may not be quite enough to cancel it. We're erring on the side of caution here, but there is a fairly decent chance that snow plows won't clear sidewalks by 7:25 a.m. Keep your fingers crossed, your bodies snow-dancing and your pajamas on backwards and we just might get lucky tomorrow.

Editor's note: Lay off the groundhog - and this Silver Chips Online writer - for any weather occurrences that don't match our normal 247.2 percent accuracy.