The winds, they are a-blowin'

Our cohorts at AccuWeather and the Capital Weather Gang are describing the storm coming our way tonight as a "bomb" and a "super storm." We have to say, we're less than impressed. After the mess and accumulation Snowmageddon caused (make sure you vote on our meltWatch special!), we hardy Montgomery County residents are ready for anything. 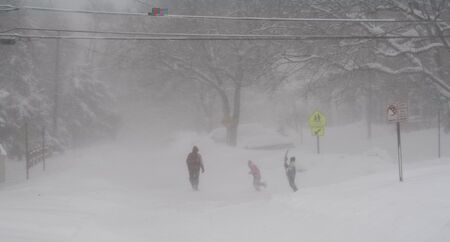 Photo: Heavy winds might make it seem like snow is falling - don't be fooled! Photo courtesy of Lorena Kowalewski.

Be sure to take this night to say your last good-byes to TV and Internet and stock up on warm blankets and batteries - heavy winds that down trees and power lines are much more likely to delay school than snow. The weather conditions just aren't the perfect mix that yields the fluffy stuff. Temperatures have risen into the low-and-mid 40s and will only slowly fall back this evening, making it difficult for any snow that does fall to stick. It's just as well - if the snow mountains in the Blair parking lot get any taller, vertically challenged Blazers won't be able to scramble over them to get to class.

Even though a school closing is unlikely, Silver Chips Online is here to set your restless minds at ease (disclaimer: expect to be disnowppointed).

Delays, however, won't extend the school year and give the county more time to get sidewalks cleared. (By the way, school should technically still be closed from the last storm. Anyone else had to trudge in the slush on University Blvd. because the sidewalks are covered?)

Unfortunately, we'll probably have to see each other tomorrow. Bundle up and don't blow away - and be wary of old snow piles suddenly gusting your way, a la the poor journalist below.

snoWatch thought of the day - A surefire plan for snow removal: spring.