snoWatch: We could be making history

Bundle up - it's gonna be a big one

Even we didn't expect an early winter break! Fairfax County set the precedent but Montgomery County has never been one to follow the pack. Obviously the snow plows aren't getting to neighborhoods and clearing up those slick streets (Deepa's attempt to drive down the street is proof).

So rejoice, Blazers. And if you don't believe us, here's the evidence:

Montgomery County Public Schools are closed Wednesday, December 23, due to emergency weather conditions. All school and community activities in school buildings also are canceled. All administrative offices are open. Day care programs in school buildings will remain open as scheduled.

EMERGENCY MESSAGE: 12/18/2009 at 11:30 PM --
Montgomery County Public Schools and all administrative offices, as well as day cares, are closed Monday (12/21) due to emergency weather conditions. All school and community activities in school buildings are canceled.

It's official! A historic amount of snow fell over the D.C. region, up to 18.5 inches in some areas, making this storm the biggest December snowfall since 1932, according to NBC.

The news is in from Copenhagen - the nations of the world have decided yet again to "recognize" climate change without committing to emissions reduction. And just like that, Mother Nature responds as vengefully as she can, by dumping a ridiculous amount of snow on the ground over a weekend. This time however, she may have overplayed her hand. 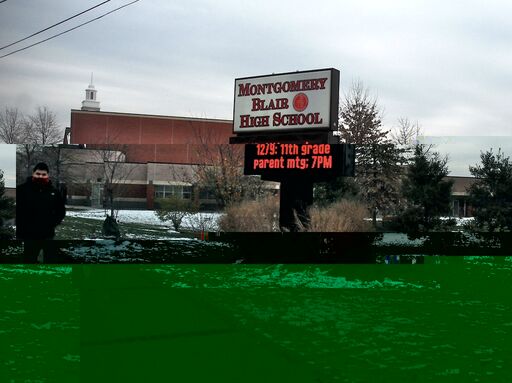 Photo: The remnants of the season's first snow wither away on Blair's lawn.

Photo: The remnants of the season's first snow wither away on Blair's lawn. Photo courtesy of Alex Joseph.

Washington D.C.'s greatest December snowfall on record (since the late 1800s) occurred on December 17, 1932 when 12 inches fell. As of now, according to weather.com, the minimum amount of fluffy, white revenge we're set to receive is a joyfully high 16 inches. Our clairvoyance senses a record shattering, but for safety's sake we'll place our odds at 50/50 (i.e. flip a coin, your bet's as good as ours - but you didn't hear it from us).

Even though we're obviously against snow on a Saturday, here's the good news: it's going to be a white Chrismahannukwanza! If the experts - meaning us - are right, it may be time to call out the hounds of winter for Santa's sleigh.

And it's about time, gosh darn it. Think about it, Blazers. We haven't had a decent snow year since '03 (remember that President's Day blizzard that left us with five days off?). Like Vinny Cerrato and the Redskins, it's out with old traditions and in with the new.

Now we at snoWatch are usually in the habit of collecting advanced scientific and meteorological data to confirm our psychic predictions. Unfortunately, Deepa's parents are out stocking up on bread, milk and ice melt and she isn't bold enough to brave the slick streets alone (slash she doesn't actually have her license - only 58.5 hours left). David is busy recovering from an agonizing and deeply embarrassing hockey loss to a private school you've never heard of. But never fear! Our superior, highly developed minds have always been there for us in the past.

If this were New York, we'd have clean, spotless streets by tomorrow morning. Heck, if this was D.C., we'd still have thawed, sanded streets by Sunday. Fortunately for us, this is Montgomery County, where the snowplow drivers are overworked and underpaid. Sleep in, Blazers, sleep in!

Chance of closing on Monday: 65 percent

MCPS is an unpredictable and vengeful force - much like Mother Nature herself. But let's face the facts, Dr. Weast (we're journalists after all, and we love our facts). The county is facing a huge budget crisis and in the spirit of giving, we're more than willing to accept a day off. And with that hiring freeze in effect (well, if the staff wasn't frozen already they're sure to be after this weekend), chances are the county won't have those sidewalks cleared and ice-free in time for Monday morning. Here's rooting for an early winter break. Happy holidays to all and to all a happy snowfall!