(Almost) Livin' on a prayer?

Editor's note: according to an email from Assistant Principal Edith Verdejo Johnson, if there is no school tomorrow (Friday) there will still be a professional day on Monday, Jan. 24. The eighth/ninth period exams as well as make-up exams will be on Tuesday, Jan. 25th. The lesson? MCPS doesn't mess with professional days.

One, we can handle. Two? Absolutely not. 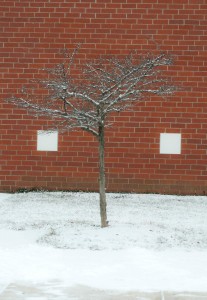 Snowy tree outside of Blair

Photo: Seriously, though, yesterday it was over 50 degrees outside. Get it together, sky. (Completely irrelevantly, this is a picture of a snowy tree outside of Blair.)

Photo: Seriously, though, yesterday it was over 50 degrees outside. Get it together, sky. (Completely irrelevantly, this is a picture of a snowy tree outside of Blair.)

Yes, we have turned into ever-repulsive snow day naysayers. And why, you ask? Why do the proponents of precipitation, spokespeople of slush, advocates of ice and flag-bearers (thank you, Thesaurus.com) of flurries suddenly turn their backs on all they hold near and dear? One little phrase: second-semester senior.

Roughly half of us here at SCO will be second-semester seniors after exams are over and done with (those of you in the class of '11 who are already done with exams: go away. It hurts to look at you.), and those pesky eighth/ninth period exams are the only things keeping us from eternal glory. Wait, no, just from less homework. Nevertheless, we're at home studying for our last exams, not spending time with our friends and trying to ignore the alluring calls of the new TV on tonight - we miss you, Jersey Shore - and that's messed up.

And since Tuesday's surprise cancellation gave us a nice day off to sit around and do absolutely nothing get extra prepared for our third and fourth period exams, our terrible first-semester senior experience has already been extended by 24 hours. We're sure that the rest of you freshmen/sophomores/juniors are eager for the second, and shorter, half of the school year too. So, all together now: here's hoping to a light dusting!

Predictions: where we make up fake-ish (we are three-for-three this year) numbers based on real facts

According to the Capital Weather Gang, it's supposed to start raining between eight and 10 p.m. and that rain will gradually turn into snow as temperatures drop later in the night. Don't get your hopes up, though, as we here in Silver Spring are supposed to only get about an inch total and the county is super enthusiastic to show off all of its new snow-preparedness, seeing as how there's about 30 pounds of salt on each street. In conclusion, we bet that some form of school will be in session. But again, rain turned snow could mean ice further up county, so we can't count a two-hour delay out.