snoWatch: What is love? Snow days, of course

No more "Ice Ice Baby," bring on flurries for lovers

Be still our hearts, it looks we've set a record - two days of mildly inclement weather in a row? Hopefully this Valentine's Day, we'll be showered with more than just gifts from our hearts' desires. After all, a day cuddled up in front of the fireplace with your significant other is a lot more romantic than - dare we say it - singing valentines and candy grams at school. 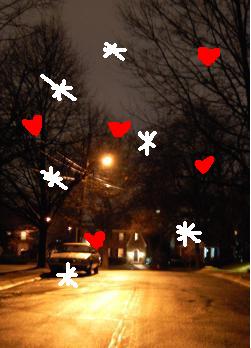 Photo: Snow and hearts are in the air/Oh MCPS don't you dare/Make us to go school. Remember: we're journalists, not poets.

Photo: Snow and hearts are in the air/Oh MCPS don't you dare/Make us to go school. Remember: we're journalists, not poets.

But before we move on to the snoWatch crew's expert weather predictions, it's high time for a poll. Who was actually able to drive to school this morning? And who didn't slip on their iced up (the non-bling kind) driveway? Don't be shy, even a tightrope dancer would have fallen out there.

Yet with MCPS's recent affinity for two-hour delays, the question remains whether tonight's extra batch of bad weather will be enough to end the no-snow-days drought. Cupid baby, send us some snow!

In a manner not at all identical (yes that is the word of the day, and no we're not being observed by administrators pressuring us to use it) to last night, temperatures are expected to plummet tonight, hitting 27 degrees by 7 a.m., according to weather.com. While the precipitation will have stopped by then, the showers and flurries expected to continue until 2 a.m. should be sufficiently frozen on the ground to ensure another two-hour delay.

Shakespeare melodramatically ended his play "Romeo and Juliet" with the lines "For never was a story of more woe, than this of Juliet and her Romeo." Sorry Billy, but you lived in the days before global warning. The most woeful storyline now is the likely occurrence that we will go the entire winter without a snow day. With a predicted high of 44 degrees tomorrow and only up to one inch of expected snowfall, the conditions spell yet another day in school for Montgomery County. Let's just hope that the combined depression of school and being single won't drive any lonely Blazers to the chemistry rooms with the idea of concocting their own poisonous potions, turning Cupid's day into a Shakespearean tragedy.

snoWatch Fact (because we really are weather experts):

So your Valentine's Day date (or you, if you're single) may be as cute as a button or as hot as a red hot chili pepper (yes yes, that is a saying), but would you know what to do if at dinner, your date accidentally ate a chili pepper? Luckily, snoWatch's experts are here to help.

According to Pauline Couture, a fellow journalist and author of the novel "ICE: Beauty. Danger. History," (Couture, Pauline. ICE: Beauty. Danger. History. N.p.: McArthur & Company, 2005., thank you Noodlebib) ice water will not ease the pain of a consumed chili pepper because peppers contain capsaicin, which is insoluble in water. Instead Couture recommends a dairy product or starchy food. Just don't tell your date that she's fat if she wolfs down some ice cream to absolve that spicy hot taste!

Disclaimer - As there will probably be school tomorrow, snoWatch and Silver Chips Online can take no liability for anything you or your date consume during lunch in the cafeteria.