Superbowl Sunday is behind us, but Dan Snyder isn't ready to let go of the game. Snyder, who is the current owner of the Redskins, filed a libel lawsuit against the Washington City Paper in early February. It remains to be seen whether he'll reach the end line and collect a cool $2 million for damages. 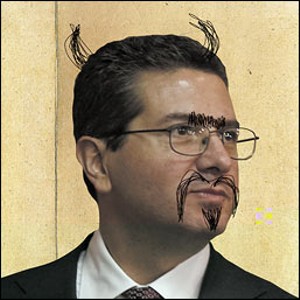 Photo: Dan Snyder, owner of the Washington Redskins, is suing the City Paper for libel.

Three months ago, City Paper journalist David McKenna published "The Cranky Redskins Fan's Guide to Dan Snyder." The article, which literally critiques Snyder from A to Z, is an amusing read that was promptly lost in the shuffle of internet news within the week.

That is, until Snyder dug it up again. Urged by his public relations head Tom Wyllie, Snyder sued the City Paper for defamation. What's more, he claimed that the picture accompanying the article – a shot of Snyder complete with devil horns, a pointed beard and scribbled-on unibrow – was blatantly anti-Semitic. (Everyone who has ever defaced a high school yearbook would probably beg to differ.)

It's a strange stunt to pull. The City Paper article could be called immature, but prejudiced against Jews? That's stretching it thin. Snyder has even recruited the Simon Wiesenthal Center, an organization that protects human rights of Jews around the world.

Here's the kicker. If Snyder had left well enough alone, McKenna's article would have died a quiet death. Instead, "The Cranky Redskins Fan's Guide to Dan Snyder" has garnered more attention in the past month than when it was originally published back in November.

Over the last ten years, Snyder has gradually alienated Redskins fans. Taking down the City Paper won't do a whole lot for his threadbare reputation and it's certainly gratifying to watch this lawsuit unfold. One thing is clear: as Snyder fumbles his way through the court case, McKenna might just have another story on his hands.