The Blair boys' varsity soccer team was hoping to play its way to a State Championship this season. The Blazers wanted a piece of the best teams Maryland has to offer: squads like Magruder, Whitman and Churchill. But Blair was unable to get past one team this year that proved to be the thorn in the Blazers' side. Instead of moving one step closer to school history and state glory, the Blazers fell 3-0 to the Walter Johnson Wildcats in last night's 4A West region semifinal in shocking, heartbreaking fashion. 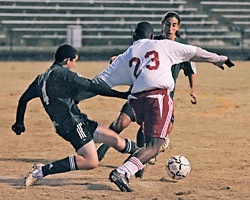 Photo: Yendoukoa Lamboni (23) gets slide tackled from behind by a WJ player early in the first half.

Photo: Yendoukoa Lamboni (23) gets slide tackled from behind by a WJ player early in the first half.

Despite the loss, head coach Adrian Baez praised his team's effort and called this season the best he has ever been a part of. The Blazers finished 12-2 after winning their first eleven games, and were led by nine senior starters. "I'm really proud of this team", said Baez. "It's the best soccer I've played in my fifteen years of coaching."

Less than two weeks ago, Blair soccer suffered its only loss of the regular season at the hands of the Walter Johnson Wildcats. But hampered by injuries and knowing the game was meaningless in terms of their playoff seed, the Blazers shrugged off the 1-0 defeat with relative ease. So going into last night's playoff rematch with the Wildcats, the Blazers were confident that with a healthy squad on a neutral field, the game would go their way. But Blair, seeded second in the 4A West region and ranked fifth in the Metro area by The Washington Post, fell to WJ for a second time.

The Blazers controlled the game for the first forty minutes, but neither side could break the deadlock in the first half. "We got possession and we got the ball in the areas that we didn't last time we played them," said Baez. "We had them running scared."

Unfortunately for Blair, Walter Johnson made the breakthrough early in the first half. In the 45th minute, Wildcats' senior midfielder George Marchant made a stellar run down the right wing, culminating in a low cross that was pounded into the net by junior Lucas Szabo, giving WJ a 1-0 lead. Baez attributed the goal to a breakdown in the back. "The first goal was just a defensive lapse," he said. 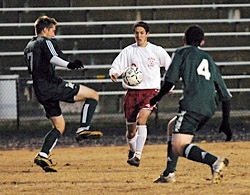 Photo: Senior Josh Zipin (9) controls the ball and sends a centering pass against the Wildcats.

Photo: Senior Josh Zipin (9) controls the ball and sends a centering pass against the Wildcats.

The Blazers fought to get back in the game, but were frustrated by an inability to net a goal despite having a bevy of dangerous chances in the second half. Sophomore Mikey Funes was unable to provide the magic he had earlier in the season on set pieces, and seniors Matias Salinas and Lamboni Yendoukoa were unable to test the Wildcats' goalie, even when they found themselves inside the box.

Just when it seemed the Blazers were gaining momentum and putting pressure on Walter Johnson's defense — senior Phil Allen had his open-goal shot blocked in an apparent handball, but no call was made — the Wildcats struck again. Goals in the 71st and 76th minutes by Marc Squire and Austin Miller provided the Wildcats with insurance and put the dagger in Blair's 2006 playoff hopes.

Walter Johnson proved to be the only team to beat the Blazers this season, and the only team to hold Blair's potent offense scoreless. The three goals scored by the Wildcats in the game were also the most Blair allowed in a single game all year. Senior keeper Matt McClain was steady in goal all season for the Blazers, as was its core defensive unit of Aguirre and seniors Asare-Wassow, Alec MacLean and Ethan Kuhnhenn.

As the final whistle sounded and the Wildcats sideline erupted, the exhausted and bewildered Blazers remained on the field for several moments, as if they yearned to play just five more minutes of soccer. Indeed, the team had hoped to be playing for several more weeks, and for the Blazers' 14 seniors, the loss meant an emotional end to years of devotion to the Blair soccer program.

Yet once the initial shock and pain of the loss wore off, the Blazers left the field with dignity, realizing that they had just been a part of one of the best seasons in Blair sports history. Baez commended his team's skills and remained pleased with the way his team handled itself all year. "I have never had a team this talented," he said. "We represented Blair, and we represented well."

While next year at least two Blazers will be playing soccer at the next level, as Zipin has committed to Davidson College in North Carolina, and Worden to American University in D.C., and others, like defenders Alec MacLean and Asare-Wassow are still considering their college soccer options, for most of Blair's graduating players, last night's loss was the last game of their careers. Next season, the team will also be without key seniors Allen, Salinas, Yendoukoa, McClain, Kuhnhenn, Berhanu Beyene, Jack Graul, Nebiat Mekonnen, Oscar Melendez, Nick Mozer and Jesse Ruf.