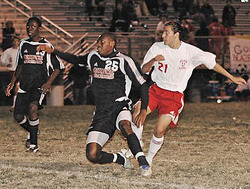 Photo: Senior Matias Salinas (21) and QO defenders watch as Salinas's shot goes on target for Blair's first goal in the opening minute of the game.

Photo: Senior Matias Salinas (21) and QO defenders watch as Salinas's shot goes on target for Blair's first goal in the opening minute of the game.

The boys' varsity soccer team advanced to the 4A West region semifinal with a 4-2 Halloween night win over the Quince Orchard Cougars (7-7).

Blair quelled nagging team chemistry issues and got over its first loss of the season last week to return to top form against the Cougars, a team the Blazers beat 4-1 earlier in the season. "We had a few good practices during the week and we regained our composure," said head coach Adrian Baez. "We are ready to start playing again the way we were earlier in the season."

The Blazers (12-1) got off to a hot start, when, in the first minute of the game, senior co-captain Josh Zipin chased down a long ball in the box and flicked it back to the middle. Senior forward Matias Salinas was waiting in perfect position, and poked the ball over the head of the Cougars' goalie to give Blair an early 1-0 lead.

The Cougars answered in the sixth minute, when junior Rory Carroll knocked the ball out of Blair goalie Matt McClain's hands and into the net after a QO corner kick. The goal knotted the score at one, but the Cougars couldn't match Blair's offensive output for the remainder of the first half.

In the 27th minute, senior co-captain Mike Worden took the ball down to the endline and, after faking a Cougar out of his boots, lofted a high ball across the goalmouth. Leaning back, senior striker Yendoukoa Lamboni headed the ball back over the outstretched hands of the Quince Orchard goalie, giving Blair the go-ahead goal. 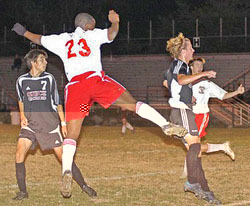 Photo: Senior striker Yendoukoa Lamboni (23) connects with Mike Worden's lofted ball to send a header into the back of the net to give the Blazers the lead.

Photo: Senior striker Yendoukoa Lamboni (23) connects with Mike Worden's lofted ball to send a header into the back of the net to give the Blazers the lead.

Just eight minutes later, with the Blazers on the attack again, the ball squirted out to senior co-captain Alec McLean, who ripped a rising, 30-yard line-drive blast that banged into the back of the net. Fans, players and coaches alike pointed to McLean's amazing goal as one of the best plays of the season. "What a cracker shot," said Baez. "That may be the goal of the year, although we have many to pick from."

The goal gave Blair a 3-1 lead, and as the Blazers heading into halftime, they were clearly in control of the game. But the offensive onslaught was not over quite yet, for the Blazers found the net for the fourth time early in the second half. After a dazzling run down the right side, Zipin slid a central pass to sophomore midfielder Mikey Funes, who poked the ball past the out-of-position Quince Orchard keeper to put the score at a dominating 4-1.

In the 50th minute, the Cougars sent a high, bouncing ball into the Blazers' goalbox, and as senior co-captain Alex Asare-Wassow attempted to hit a clearing header, he was docked with a foul, setting up a penalty kick for Quince Orchard. Cougar captain Nick Siebenlist calmly placed the ball in the right corner of the goal, narrowing the Blazers' lead to 4-2.

McClain's work in goal, combined with the stingy, attacking defense of Asare-Wassow and MacLean, held the Cougars scoreless for the rest of the game, and when the final whistle blew, the Blazers erupted in celebration as they mobbed one another. Dozens of adoring fans poured onto the field to congratulate the team. 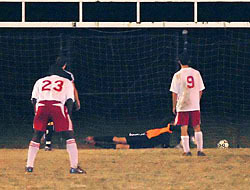 On a night when even The Washington Post was watching, Blair played some of its finest soccer, regaining its footing and returning to full strength in the health department. The Blazers' normal starting eleven was back intact despite last week's injuries. Blair will need to be in top form for its next game; the Blazers will face Walter Johnson on Friday at Churchill. The Wildcats are the only team to have beaten the Blazers all year, meaning the squad will be even hungrier to exact revenge.

If the Blazers, currently ranked number five in the D.C. Metro area by The Post, can pull off a win Friday, they will likely face Magruder in the 4A West Final. And with #1-ranked DeMatha losing to O'Connell in the Washington Catholic Athletic Conference playoffs, the Blazers could be looking at a top-slot ranking in The Post in the coming weeks. But before Blair can look to the future, the team must be wary of the present, for a fierce opponent lies in WJ, which has been the only team to hold the Blazers scoreless all year.

The Blair boys' varsity soccer team will take on Walter Johnson this Friday at Churchill.