Web surfers should know what popular web sites see, store and own

On Feb. 4, Facebook, the world's largest social networking site, made a subtle change to its Terms of Service. Previously, Facebook users granted the corporation a license to use content they posted "on or in connection with" the network. The new terms, however, eliminated language stating that the license would automatically expire once a user deleted their account. Anything a user has ever uploaded onto the site could be archived and reused even if a user quits Facebook. 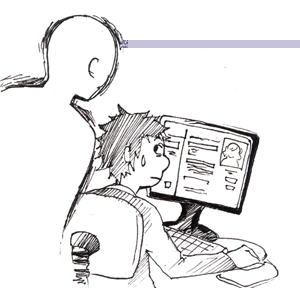 What's worse is that Facebook's changes were typical of Internet privacy polices. Once the modifications were spotted by the Consumerist, a popular online blog, company co-founder Mark Zuckerburg defended the policy as "consistent with how other services like e-mail work." Although Facebook has since repealed its troublesome changes, they nevertheless raise disturbing questions about the level of control we have over our own digital footprints - not only on Facebook, but on the Internet as a whole.

Online privacy, or lack thereof, has been a long-standing issue since the creation of the internet. Some of today's largest corporations do business almost entirely online. Google, Yahoo!, Facebook and MySpace all offer free features and services that make life more convenient for everyday users. On the surface, utilities, such as social networking, search engines, maps and e-mail, seem completely harmless. But since these companies don't make money by giving away free stuff, their main source of funding is from advertising, tailored to users' preferences from the information consumers put through them every day. By peeping online behavior, these companies have access to a very valuable private commodity.

This practice, known as data mining, gives corporations too much power over sensitive information that users may not want to divulge. According to a New York Times study, Google can collect data on a single user over 500 times a month. The same study indicates that Yahoo! and MySpace are even more prolific, collecting individual users' data over 1000 times per month. Google is also developing a number of web-based tools that can reveal an unprecedented amount of information about their users. Google Latitude, for example, allows friends to track each other via their cell phones; all the information is conveniently processed and stored by Google's servers. With these tools in hand, companies can draw borderline stalker-like dossiers on one's preferences and personality quirks, creating an environment ripe for abuse.

These concerns aren't just sci-fi paranoia. Concentrating such a massive amount of information in a few corporate hands inevitably leads to information leaks. Last year, MySpace uncovered a bug in their system that allowed anyone interested to access the photo galleries of any MySpace profile, including those marked private. Similar breeches in other corporations' systems could subject users to unwanted and potentially dangerous voyeurism.

Google, Yahoo!, Facebook and other data-collecting corporations all have privacy policies that supposedly inform their users of potential privacy violations. Unfortunately, they're long and dense. Most users lose patience, simply check the box labeled "I agree" and whisk onwards, oblivious to the risks. According to a study performed in the UK by Information Commissioner's Office (ICO), 71 percent of users simply ignore privacy policies, while 62 percent want them to be clearer. To prevent these occurrences, the Federal Trade Commission has urged as recently as Feb. 17 for companies to make these terms more "clear, concise [and] consumer-friendly."

Companies need to create policies that average consumers have the time and patience to understand. Sure, companies need funding to provide free services, which is why they collect so much sensitive information in the first place. But hiding their practices behind confusing legalese hides the dangers from consumers. If consumers knew what they were signing up for, maybe they would think twice.

The public is in sore need of laws regulating Internet-based privacy, which are currently as good as nonexistent. Firm lines need to be drawn concerning what companies can and can't collect about users' online behavior. In the meantime, consumers need to protect themselves by learning just how much power corporations have. Perhaps the best thing companies can do now is follow in Facebook's footsteps. After repealing the changes to its privacy policy, it's now going even further and allowing users to vote on changes. It's time for other Internet giants to do the same.