Softball bows out in Regional Final 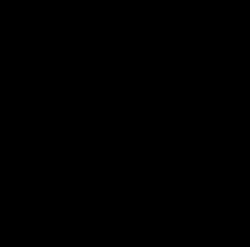 Friday's game ended the same way Blair's game against Gaithersburg did. The Blair faithful was standing and clapping, honoring the softball team and their performance. The only difference was that this time there were tears of sadness streaming down the softball team's faces.

The Blair softball team's dream of a state championship came to an end Friday, as the Blazers lost to the Damascus Hornets 8-4 in the 4A West Regional Final. The Hornets are one of only three teams to beat the Blazers in the last two years as Blair went 32-5 in that span.

The Blazers "left everything on the field," according to coach Louis Hoelman, and played one of their best games in a losing effort. Unfortunately, another complete game from senior ace Annie Denenberg and more great defensive plays were not enough to push Blair past Damascus. The mysterious absence of Michelle Linford, missing due to a prior commitment in Pennsylvania, really hurt the Blazers. Junior Eve Kenney stepped in for Linford, Blair's anchor at second base, and played well, but the Blazers missed their co-captain's big bat in the middle of the lineup and leadership in the field. 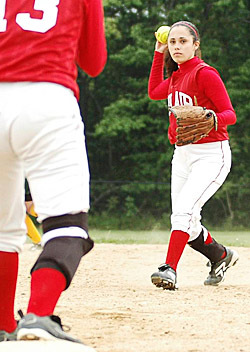 Photo: Stepping up for senior Michelle Linford who was absent from Friday's game, junior Eve Kenney made several key plays at second base.

Photo: Stepping up for senior Michelle Linford who was absent from Friday's game, junior Eve Kenney made several key plays at second base.

The field conditions were absolutely abominable and tipped the scales in the Hornets' favor. The outfield had grass that ate at the players' ankles and a fence so deep, its sole purpose was to close off school grounds. Damascus, a power hitting team, took advantage of the near-non existent fence by mashing deep moon shots to the outfield. Conversely, the Blazers, whose strength lies in its speed on the base paths, could not capitalize on the field conditions.

After spotting Blair an early run in the top of the first off a RBI groundout from Anna Szapiro, Damascus came back with two runs of their own in the bottom half of the inning off of a towering inside-the-park homerun. This would be a recurring theme throughout the contest.

It seemed that whenever the Blazers took a step to close the gap in the top half of an inning, the Hornets would come right back in the bottom half and reestablish their stranglehold on the game.

Blair would not threaten again until the top of the third when catcher Claire Lieberman ripped a triple to left. Unfortunately, with two outs, a subsequent strikeout by shortstop Anna Szapiro ended the inning.

In the bottom of the third the Hornets would extend their lead. After senior third baseman Juliet Garlow made a great play to hang on to a stinging line drive for the first out, the second batter hit a high, deep shot that senior center fielder Megan Harmison nearly caught. Unfortunately, the ball was hit far enough that the Hornets hitter was able to round the bases before the ball made it back to home plate. After a bloop single and a groundout that advanced the runner into scoring position, an RBI single to center pushed the Damascus lead to 4-1. 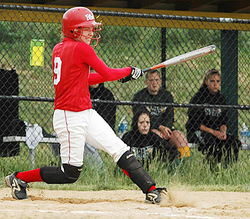 In the fourth, Blair would have its best opportunity to tie or take the lead. After back to back singles by Denenberg and senior Dani McClay, senior Diane Chase drew a walk to load the bases with no outs. Senior Liz Scroggs stepped to the plate and drew a walk herself, scoring Denenberg from third. After Harmison struck out, senior right fielder and heavy hitter Allison Rubin stepped in. Reliable in these situations all year, Rubin drew another walk, cutting the Blazers' deficit to just one run at 4-3. Back to back outs would end the inning, stranding the bases loaded.

Following the trend, the Hornets would rebound in the bottom half of the inning, scoring four more runs off of Denenberg to bring the score to 8-3. With runners on second and third an error by Kenney scored the Hornet runner from third. Back to back singles from the middle of the Damascus order brought home one more run, and then after Rubin overran a single to right, two more runs would score.

The traveling Blair faithful, many of whom were students who had made the 40 plus minute trek to Damascus, could be heard throughout the game. In the middle of the fifth, with the Blazers still trailing by five runs, the students grouped together and hollered their best rendition of "Take Me Out to the Ballgame." Much louder than the Damascus fans, most of whom were parents, the Blazer die-hards sung their heart out for the cause.

Blair, both amused and inspired by their fans' antics sent the Hornets back to the dugout much quicker than the previous inning that saw ten Damascus hitters come to the plate. Unfortunately, the top of the sixth was fruitless for the Blazers as Harmison, Rubin and Garlow were sent down in order.

After holding the Hornets scoreless again in the bottom of the sixth, the Blazers came up to bat in the top of the seventh with the goal of making an improbable comeback, a storyline they have been on the wrong side of a few times themselves. 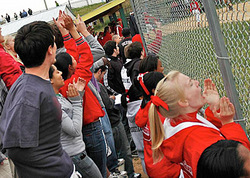 Photo: Despite the 45 minute drive, scores of Blazer fans made the trip up to Damascus to support Blair.

Photo: Despite the 45 minute drive, scores of Blazer fans made the trip up to Damascus to support Blair.

Back to back singles by Lieberman and Szapiro put runners on first and second with no outs. After a strikeout by Denenberg, a single to center from McClay loaded the bases with one out. Chase, already up once with the bases loaded, produced another walk and another run for the Blazers to bring the score to 8-4.

Left fielder Liz Scroggs followed Chase for her second at bat with the bases loaded as well. After watching a couple of pitches and working the count, Scroggs bounced a shot to second that was flipped to the Hornets shortstop and then fired to first for the double play that would end the game.Hoelman said he was frustrated that the Blazers could not break through and get that elusive clutch hit, but said he had no regrets and could not have asked any more of his team. "When it comes down to it and your team puts it all out there, you're not mad. Not mad at all. They left it all on the field," he said.

Friday's game bid goodbye to the team's twelve seniors: Anna Szapiro, Michelle Linford, Dani McClay, Claire Lieberman, Juliet Garlow, Liz Scroggs, Shirla Williams, Diane Chase, Sarah Curcio-Rudy, Annie Denenberg, Megan Harmison and Allison Rubin. Hoelman called this class "one of the best he has ever had," and said it was an honor to coach not only a good group of players, but a great group of individuals.

"It's been a pleasure coaching them," he said. "And I hope this experience is one they'll remember for the rest of their lives."